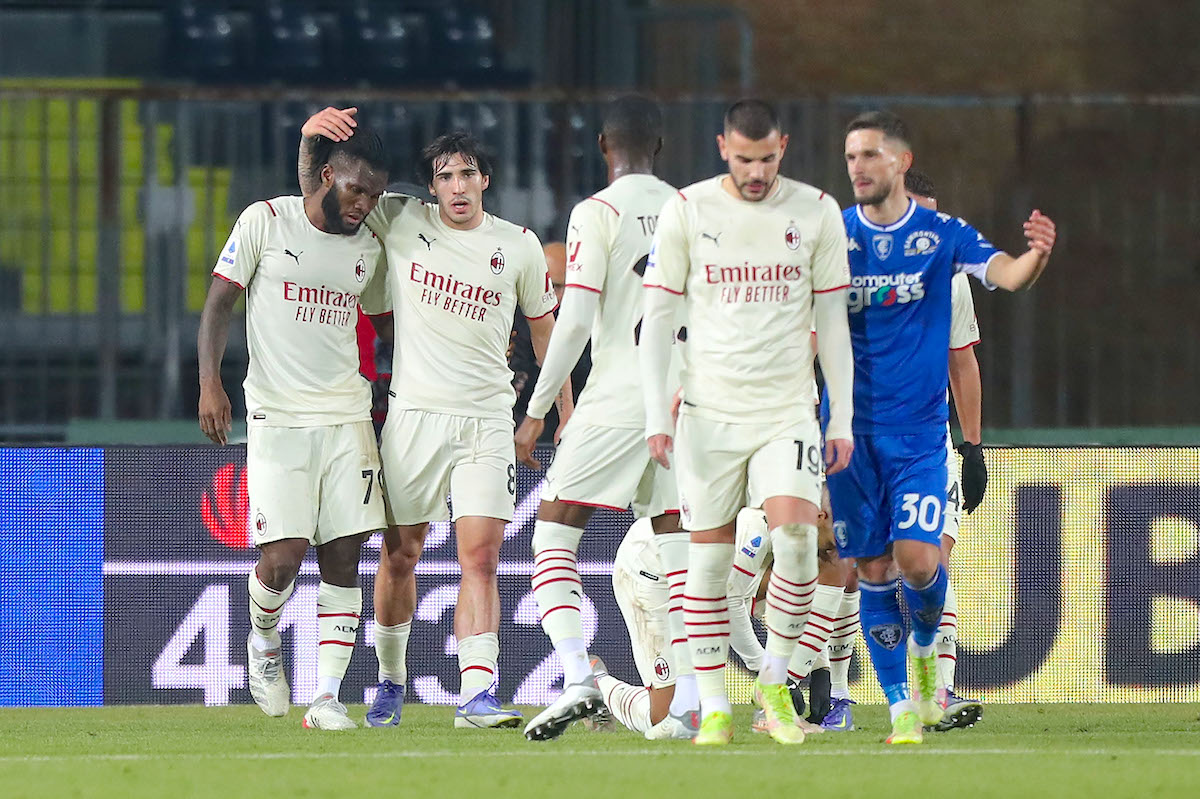 AC Milan produced a statement win right when they needed it as they went to Empoli and emerged 4-2 victors at the Stadio Carlo Castellani.

Things started well for Milan as Franck Kessie rewarded the faith of head coach Stefano Pioli playing him in a more advanced possession as he fired the Rossoneri into an early lead, but Bajrami equalised not long after to bring the sides level.

Kessie was again on the scoresheet before the break thanks to a goalkeeping howler, and two more goals came after the interval with Alessandro Florenzi netting his first for the club via a sweetly taken free-kick and Theo Hernandez’s close range finish adding some icing to the cake, but a late penalty from Andrea Pinamonti made it a two-goal win.

Napoli’s dropped points at home against Spezia meant that the Diavolo quickly took second spot back from them heading into the Christmas break, remaining four points behind rivals Inter.

Pioli made some interesting selection choices including playing a double pivot of Ismael Bennacer and Sandro Tonali with Franck Kessie in the playmaker role and Alexis Saelemaekers on the left wing, while Theo Hernandez also came back into the side having recovered from illness.

The first chance of the game went to the hosts Empoli as they started brighter, and some nice build-up down their right flank ended with Stojanović slipping a ball into Bajrami who fired over and wide from inside the box. Fikayo Tomori was then on hand to turn away a cross-shot from Pinamonti that was whipping across the six-yard box.

The first shot of the game for Milan came in the ninth minute as a cross into the box deflected into the lap of Junior Messias who brought the ball under control and sent a looping shot over his shoulder but into the arms of Vicario. He was called into action again just over a minute later, this time going to ground to make a save from Saelemaekers’ low shot.

Milan took the lead in the 13th minute of the game as Franck Kessie finally got his goal following the VAR controversy of Sunday night. Ironically it was Giroud who again went to ground, but this time from a Saelemaekers cross and this time from an onside position as the ball fell to Kessie and the Ivorian finished low into the bottom corner with power.

However, the lead would not last for long as Empoli got back on level terms. A second cross was pumped into the box and fell to Bajrami near the left corner of the area and the No.10 fired a low shot across goal that squirmed under Maignan and in as he should have done better.

Deliveries from the right side continued to cause problems and Stojanović low cross was eventually gathered by Maignan in the 25th minute with Cutrone making a dangerous run towards the edge of the six-yard box.

Nine minutes before the break Maignan made his best save of the game as some confusion between Tomori and Romagnoli allowed Pinamonti to shoot from a narrow angle and the Frenchman got a hand to it to divert the shot for a corner.

Just four minutes before the break, Milan retook the lead and it was somewhat against the run of play and it was thanks to a big goalkeeping error. Saelemaekers fed Kessie inside the box and he shot low and hard from a narrow angle with the ball going between Vicario’s legs and in.

It really should have been 3-1 in added time as Saelemaekers won a corner after he let fly from 20 yards with Vicario tipping it around, and after a scramble inside the box Giroud saw an attempt save before Romagnoli fired over and wide somehow from a yard out.

There was a huge let off for Milan in the opening stages of the second half as Bajrami should have answered Kessie’s brace with one of his own. He came in from the left side of the box and found space to let fly from near the penalty spot but rattled the crossbar, and Pinamonti’s follow up attempt was also cleared amid panic.

If there was any doubting whether Pioli would actually use Kessie as an attacking midfielder or perhaps play a midfield three, it had all vanished by the hour mark as he continued to be the furthest man pushing up the field.

Just after the hour mark, the Rossoneri got their third goal of the match. A dangerous free-kick was conceded by Empoli for a foul on Saelemaekers just over 20 yards out and it was Florenzi who took on the responsibility, firing it through the wall and past a motionless Vicario into the corner for his first Milan goal.

The goal was followed up by a couple of changes as Florenzi made way along with Bennacer as Pierre Kalulu and Tiemoue Bakayoko got a run out.

It didn’t take long for a fourth goal to arrive and it came in rather bizarre circumstances. A cross from the left side went all the way to the far post where a ricochet allowed Theo Hernandez to fire in amid calls for an offside or a handball, but replays showed if anything a penalty would have been given as the ball dropped to Theo off the arm of an Empoli defender.

There was some gloss taken off the scoreline as Bakayoko conceded a penalty when the ball struck his arm from a corner with the midfielder unsighted. Pinamonti took on the responsibility and made it 4-2 with six minutes to go.

The final flourish of the game came as Romagnoli rattled the bar with the last attempt, and what a goal it would have been as he hit a volley from 25 yards.