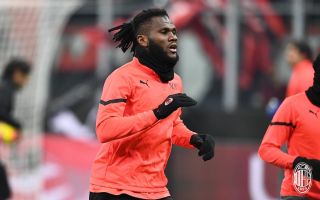 Sky: Kessie tried as an attacking midfielder during training ahead of Empoli-Milan

Some interesting news has emerged about AC Milan’s potential line-up for tonight’s game against Empoli at the Stadio Carlo Castellani.

As reported by Peppe Di Stefano for Sky (via MilanNews), Pioli is thinking of inserting Franck Kessie on the frontline as the attacking midfielder in place of Brahim Diaz. During the final training session, the Milan head coach put the Ivorian in the trident with Junior Messias on the right wing and Rade Krunic on the left behind Olivier Giroud.

It is an option that could become more likely over the course of the day when more indications could arrive. The alternative is the usual 4-2-3-1 with Kessie in the double pivot alongside Sandro Tonali and Brahim as the playmaker.

The other choices seem to be straightforward for Milan with Mike Maignan in goal and a back four of Florenzi, Tomori, Romagnoli and Theo Hernandez.

READ MORE: Castillejo’s sale could result in new playmaker arriving – the targets from Faivre to Ziyech