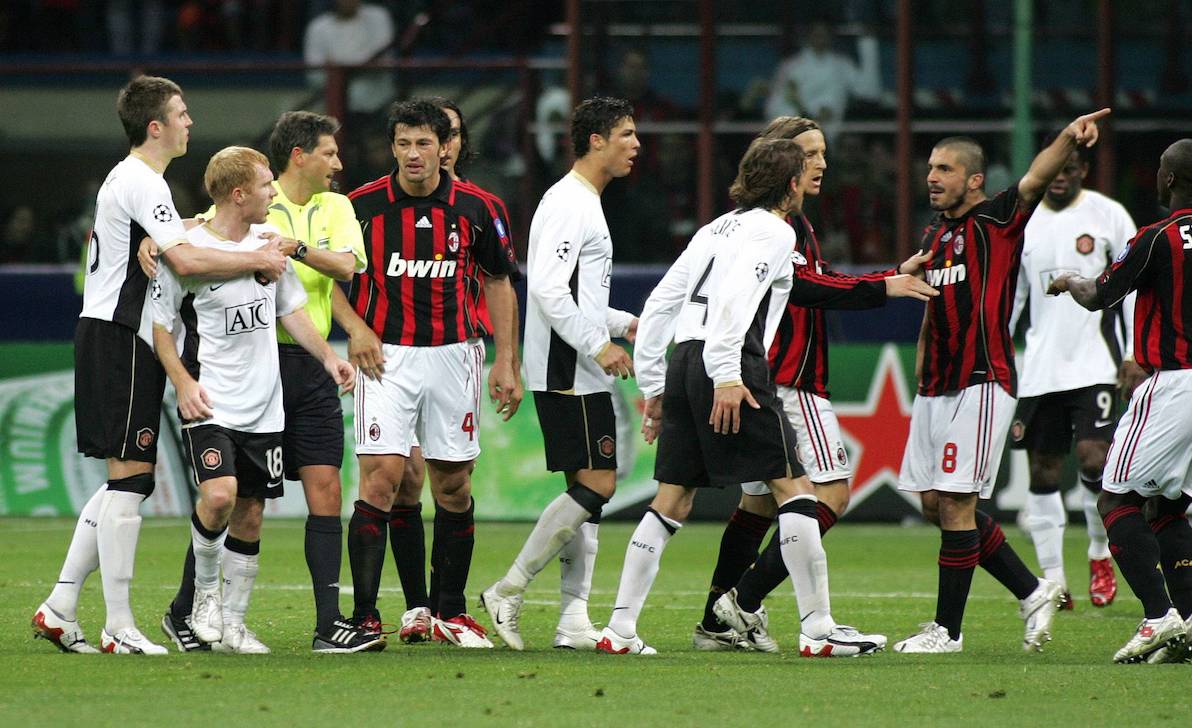 AC Milan will be looking to make the quarter-finals of the Europa League for the first time since 2002 when they host Manchester United on Thursday night.

The media headlines in the build-up to the second leg have been centred around which players Pioli may welcome back into the fold, and he revealed in his pre-match press conference that some key men are set to return.

Milan’s training session on the eve of the game against United began this morning, and the club made it available to the public via YouTube.

The good news is that Zlatan Ibrahimovic, Alessio Romagnoli and Ismael Bennacer were part of the group from the start as they look to have fully recovered for tomorrow’s match against the Red Devils. However, Ante Rebic, Davide Calabria and Rafael Leao were not on the pitch, inferring that there is a chance all or some are unavailable, but tomorrow’s final session will be key.

According to La Gazzetta dello Sport this morning, Gianluigi Donnarumma will be in goal protected by a back four of Diogo Dalot, Simon Kjaer, Fikayo Tomori and Theo Hernandez from right to left.

Soualiho Meite and Franck Kessie will be the central midfield pairing, with Alexis Saelemaekers and Rade Krunic on the right and left wing respectively and Ante Rebic leading the line as the centre-forward, with Hakan Calhanoglu in the No.10 role.

Solskjaer confirmed that Manchester United are expecting ‘four or five players’ back for the return leg compared to what he had for the first leg, and the squad he has named certainly reflects a much healthier group.

They also predict Henderson to be in goal with a back four of Wan Bissaka, Lindelof, Maguire and Shaw. Fred and McTominay would be in midfield, with James, Bruno Fernandes and Rashford behind Cavani.

Update: Cavani is injured and will miss the game, so there will be changes to the XI below. 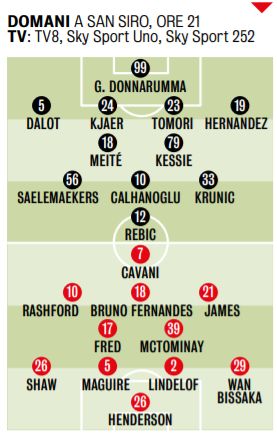 As has been previously mentioned, United have been eliminated in four of their five UEFA European knockout ties against Milan. No side has eliminated the Red Devils more often, with Real Madrid also having done it four times.

The first time United knocked Milan out came in the most recent tie as they won 7-2 on aggregate. The time before that, Milan prevailed 5-2 on aggregate in the semi-finals of the Champions League after ‘La Partita Perfetta’ (the perfect game) in the second leg at San Siro.

➤ When failing to win the first leg at home, Manchester United have been eliminated from six of their last eight ties in European competition, including one against Milan in 2004-05 in the UEFA Champions League.

➤ Milan have won four of their five home matches against Manchester United in European competition, with each of the previous five coming within the European Cup or UEFA Champions League; they were defeated in February 2010 when they last hosted Man Utd, with Wayne Rooney scoring twice for the visitors.

➤ Manchester United have won each of their last two away matches against Italian opposition in European competition, most recently against Juventus in November 2018 – prior to this run they had won just three times from 16 such attempts (D3 L10).

➤ Milan have only kept one clean sheet in their last nine home games in European competition (including qualifiers), shipping six goals in their most recent three in the UEFA Europa League this season.

➤ Manchester United’s Bruno Fernandes has scored seven goals in his last seven away games in the UEFA Europa League, in a run that started in November 2018 with Sporting CP – no player has scored more away goals in the competition over this period than Fernandes (Yusuf Yazici, also seven).

For Milan, there is absolutely zero doubt that Zlatan Ibrahimovic will be the man that everything revolved around providing he starts, or even if he comes off the bench. Either way, it is almost certain the Swede will play some part against his former club the Red Devils, for whom he was the top scorer in the 2016-17 season.

Aside from Ibrahimovic, this will be a big test for some of Milan’s loan players such as Fikayo Tomori, Brahim Diaz, Soualiho Meite and Diogo Dalot. All are set to leave the club in June as things stand, but with good performances in big games the management could make an effort to keep them.

As we saw in the first leg with his assist, United’s main man Bruno Fernandes. The 26-year-old playmaker actually could have joined Milan on two separate occasions, but played at several Italian clubs before going back to Portugal with Sporting CP.

He then made an €80m move to Manchester from Portugal and arrived with the pressure to perform given his price tag, but with 23 goals and 13 assists across all competitions this season, perform he has.

However, Marcus Rashford will also have a major part to play as he has returned from injury, be it on the left wing – where he will no doubt back himself against Dalot – or as the centre-forward where he can also cause issues.

This feels like it could be as tight but as entertaining as the first leg. Both teams will welcome some players back from injury which in theory means there is more quality, but the dynamic of the game is that as soon as the game kicks of Milan are going through as it stands, as United need a goal.

The home side will have to be smart and pick their moments to counter, while Solskjaer’s men will no doubt be wary that the tie is always on a knife edge, hence our conservative prediction.