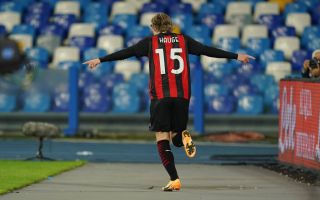 Father of Jens Petter Hauge on his son’s start to Milan career: “He is enjoying life in Italy”

It seems every AC Milan fan at the moment has caught a case of Hauge-fever, as the Norwegian starlet continues to dazzle with every opportunity he gets.

His arrival at the club was a fairytale in itself, as he rocked up with Bodo/Glimt for the Europa League third qualifying round game and impressed Milan’s scouts – who had already been following – enough for them to make a move there and then.

Since arriving Hauge has racked up four goals including three in the Europa League and one in Serie A against Napoli, putting in a real strong claim that he could be the starting left winger moving forward.

Jan Ingvald Hauge, the father of Jens Petter and a friend of the site, was interviewed by the Norwegian portal vg.no about the first few months of his son’s experience at the club.

“He is enjoying life in Italy, all the attention he is receiving gives him strength,” he said (via MilanNews).

“I think this Milan that has a mix of young talents and several experienced Scandinavian players is perfect for Jens Petter. He is really motivated to play and continue his growth path. He knows how to work to achieve his goals.”