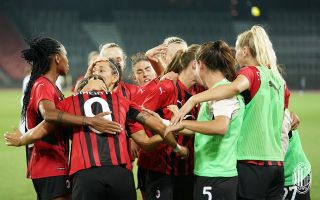 The AC Milan Women beat FC Zürich to win their first-ever Champions League match in the semi-finals of their qualification round and will face Hoffenheim on Friday.

Milan started the match brightly, as they had their first chance of the match at the 24th second. Thomas sprinted down the right and crossed it to Vero who then shot it down the middle, but Zürich’s goalkeeper, Livia Peng, denied the goal-scoring opportunity.

The Rossonere came close to breaking the deadlock again in the 16th minute when Sara Thrige’s pass sent Giacinti through on goal, but the captain’s shot was parried. Thrige had an excellent game for Milan and the player’s through passes were proof of it.

In the 21st minute, Milan had their first scare of the match as Meriame Terchoun’s deflected shot flew towards the goal. Fortunately, Milan’s Laura Giuliani was there to save the shot.

About seven minutes later at the opposite end, Vero Boquete hit the crossbar from a free-kick. As frustrating as that sequence of events was, the breakthrough would eventually arrive. It came at the 33rd minute after Lindsey Thomas received a cutback into the box from Thrige. The Dane then sent in a cross to Giacinti, who then slotted it home. Guðný Árnadóttir would also do her part for the team as she blocked a shot from Kim Dubs. And Milan would go into halftime with their lead intact.

The second half nearly began with the perfect start, as Vero’s lob found Lindsey Thomas at the 52nd minute. Her shot was then parried by Peng, and it led to a corner. The woodwork would become the Rossonere’s mortal enemy during this game, as Giacinti’s shot hit the crossbar again in the 60th minute.

Milan would, unfortunately, give up a goal as Laura Agard’s lapse of concentration led to her passing the ball directly to Zürich’s Naomi Mégroz who then slotted it home (67′).

Milan, however, did not give up. About three minutes later Bergamaschi launched a sequence with a beautiful attacking move that unfortunately, did not lead to a goal. In the 76th minute, Peng denied a header from Agard and her reward was having the wind knocked out of her as she lay on the ground for a few minutes.

The Rossonere, however, would find the lead again, thanks to a combination of passes between Vero and Grimshaw and the latter’s through ball to Giacinti.

Giacinti would then slot it home at the 81st minute. Giuliani would then preserve the team’s lead by parrying Humm’s in the 93rd. minute.

Milan would then go on to win the game and win their first-ever game in the Champions League.

The first-ever goal for Milan in Europe was scored by none other than Valentina Giacinti.

The goal came at the 33rd minute. The Rossonere skipper proved how invaluable she was during this match and was the main catalyst for Milan winning this match.

Giacinti scored a brace in this match and her second came at the 81st minute.

Credit must also be given to Vero, who started the sequence of events, and Christy Grimshaw, whose through ball found Giacinti.

Grimshaw has shown signs of improvement during the preseason and deserves to be commended for it.

Laura Giuliani was the team’s de facto coach as she orchestrated the team from her goal.

She also saved Milan on a few occasions, including at the 57th minute. Once again, she prevented Terchoun from scoring.

Her leadership, along with her shot-stopping abilities, make her invaluable for the team.

Lindsey Thomas, Guðný Árnadóttir, and Sara Thrige also deserve to be commended for their performances.

Thomas proved her worth by finding space between the lines, making runs into the box, and contributing to the buildup of both of Milan’s goals.

Árnadóttir put on a defensive clinic and helped preserve Milan’s lead by blocking Dubs’ shot at the 39th minute.

And Thrige proved to be a valuable pickup with her play on the flanks. Her cross led to Milan’s first goal and there is no doubt that she’ll make many worthwhile contributions to the team in the long run.

AC Milan will play TSG Hoffenheim this Friday at 20:00 CET. The match will be the last game in the mini-tournament and the winner of the match will move onto UEFA’s second knockout round.

A preview of the match will be posted before the game.