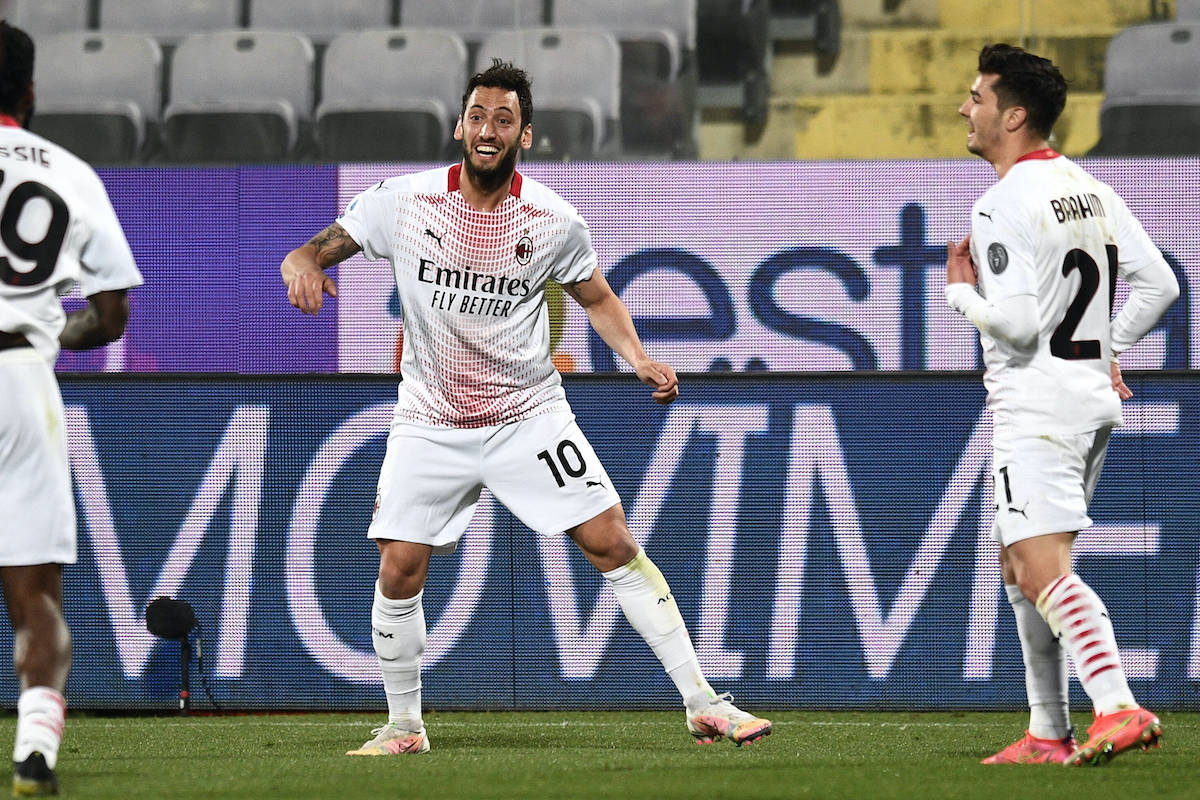 AC Milan secured a vital three points on Sunday afternoon as they came from behind to beat Fiorentina 3-2 in a thriller at the Stadio Artemio Franchi.

Zlatan Ibrahimovic was the first of five goalscorers on the evening as he latched onto a ball from Simon Kjaer over the top to finish past Dragowski – who later went off with an injury – but Erick Pulgar levelled the scoring before the break with a superb free-kick.

Fiorentina then took the lead as Franck Ribery netted against the Rossoneri again after excellent hold-up play from reported target Dusan Vlahovic, but Brahim Diaz ensured it didn’t last long as he bundled in an equaliser at the far post.

The final goal came inside the final 20 minutes when Hakan Calhanoglu guided an exquisite shot inside the far post to make it 3-2, and Milan held on to take advantage of Juve’s slip up against Benevento earlier in the day.

Fiorentina were the side that started the game on top and were very close to taking the lead inside five minutes as a corner from the left side was headed back across goal by Caceres and cleared off the line heroically by Tomori with a couple of opponents lurking ready to head home from a yard out.

Despite that pressure from the hosts, it was Milan who took the lead inside the 10th minute, and it was rather predictably Ibrahimovic who marked his return to the starting line-up with a goal. The Swede timed his run absolutely perfectly in truth and the ball from Kjaer certainly matched, giving the No.11 the freedom of Florence to finish emphatically past Dragowski.

However, Milan’s lead was not to last long as La Viola levelled seven minutes later through a sensational free-kick. A clumsy foul from Dalot on Castrovilli gave Pulgar the chance to let fly from the left corner of the box, and Donnarumma could only palm it into the roof of the net as the Chilean found the top corner at the near post.

The equaliser certainly buoyed Cesare Prandelli’s side and they were inches away from taking the lead just before the half hour mark as a corner – again from the left side – was flicked onto the near post by centre-back German Pezzella in what was another set piece wake up call for Pioli’s men.

Not long after Ribery went down inside the box having burst past Brahim Diaz towards the byline and the Frenchman squealed for a penalty as did his team-mates, though the replay seemed to show that he slipped rather than any impediment and the correct call remained.

Up the other end Theo Hernandez found space to attack down the left wing and produced a teasing pass across the edge of the six-yard box that Caceres cut out in the nick of time with Saelemaekers arriving ready to slot home.

Less than two minutes later Ibrahimovic had a huge chance to restore the Rossoneri’s lead. Again he was found in behind Fiorentina’s three centre-backs as Calhanoglu slid a through ball but this time he went for a deft chip over Dragowski and succeeded only in hitting the crossbar.

The chances continued to flow in what must have been a fascinating game for the neutrals; the latest man to fire being Castrovilli seven minutes before the break, dragging a shot wide of the far post.

Calhanoglu – who had scored on his last two visits to Florence – was very close to scoring Milan’s second as he fired from the edge of the box but couldn’t hit the target, instead seeing the ball whistle past the far post with Dragowski at full stretch.

Five minutes into the second half and with the first real chance it was Fiorentina who took the lead. An attack down Milan’s left side saw the ball pulled back to Vlahovic, who did a good job of holding play up before feeding Ribery who made no mistake in firing past an unmoved Donnarumma from inside the box.

Just as Milan’s lead in the first half didn’t last long, La Viola saw theirs wiped out after seven minutes as the Diavolo responded. A string of corners ended with Kjaer flicking one over to the far post where Brahim Diaz was on hand to stab home past the substitute keeper Terracciano.

A double change followed immediately following the goal as Ismael Bennacer and Samu Castillejo came on in place of Tonali and Saelemaekers in the central midfield and right wing positions respectively.

Not long after Milan had muted appeals for a penalty rejected as a counter-attack ended with a ball in behind to Brahim, who was sent tumbling but due to incidental contact with Caceres more than anything else.

After a difficult first half, Brahim continued to be at the heart of everything Milan created and could have had an assist to his name with a lovely chipped ball over the top to Theo that was toed wide from about six yards out.

The momentum by this point had shifted and Milan got the lead back with 18 minutes left on the clock. The high press won the ball back around the half way line and Kessie marched it forward before bundling it through to Calhanoglu, who opened his body and curled an effort inside the far post with marksman-like precision.

With 11 minutes left Pioli made another change; Brahim Diaz leaving the field after a superb second half, replaced by Rade Krunic to give Milan a bit more grit in midfield.

Giacomo Bonaventura clearly saw his name in the headlines when he stepped up and curled an effort towards the top corner with minutes left on the clock though it sailed over as Donnarumma had it covered.

The Rossoneri sat deep and compact, looking to spring a break and win the game, and they nearly did so when Castillejo ran between the centre-backs before trying to cleverly square the ball to Ibrahimovic, but the Swede was crowded out when the Spaniard should have perhaps shot.