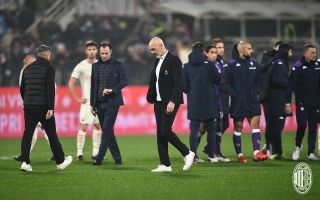 AC Milan travelled to face Fiorentina in an attempt to continue their unbeaten run against a side that have had many ups and down since the start of the season and were in a defensive crisis.

Unfortunately for the Rossoneri, they had some injuries prior to the game with Tomori, Calabria and Rebic unable to participate in the game so Pioli had to rely on Kalulu and Gabbia at the back.

Fiorentina managed to score after just a quarter of an hour through Alfred Duncan. Tatarusanu was to blame as he wasn’t confident coming out to catch the ball and made it easy for Duncan to open the scoring.

Until the end of the first half the game was fairly even with Milan pushing a bit more and having a few chances, but a sucker punch came when Saponara netted right on the stroke of half-time.

Things got worse for Milan before they got better as Dusan Vlahovic score a third goal for La Viola but Milan managed to get two goals back through Zlatan Ibrahimovic. A sloppy mistake by Theo Hernandez allowed Vlahovic to get his brace and seal the win for the home side rendering a late own-goal a mere consolation. Here are five things we learned:

1. Leaky at the back

It would be fair to say that Tatarusanu and Gabbia had a really tough night. The goalkeeper was at fault for the opening goal and so was Gabbia to an extent because of poor communication. The Romanian has done well thus far to replace the injured Maignan, but this time around he committed an unforced error.

As for Gabbia, he was having an overall decent game excluding the first goal where he could’ve done more and the third one where he was easily beaten by Vlahovic. The 22-year-old has had a limited amount of minutes since the start off the season and is far from his best form while Vlahovic is the man of the moment and it was always going to be a tough task.

It wasn’t the best of nights for Alexis Saelemaekers on the right, but even when he’s having a good game he just simply isn’t a Leao-type winger who will keep the opposition on their toes. That makes Milan’s attack predictable in a way as the opposition knows that they need to keep one side quiet and not worry to much about the other flank.

That being said, Alexis hasn’t had a breather recently and might be a bit tired, so hopefully the return of Messias will help with that and also help the balance of the team as the former Crotone man is a more attacking profile. It will be interesting to see what impact can he have on that right hand side.

Whilst the game was lost, it was really because of bad performances of individual players and sloppy errors leading to goals. The Rossoneri were also unlucky in the final third as they need to be more clinical and covert the chances.

That being said a few players did have a good game. Kalulu was solid and probably the best from that backline whilst Tonali and Kessie held the midfield fairly well and weren’t at fault for the goals.

Rafael Leao was trying hard to make a difference, but failed to get himself on the scoresheet even though he was terrorising Fiorentina before being subbed off.

⚡ It was an electric performance from @RafaeLeao7.

And then there’s Zlatan. The Swede was fairly static in the first half and missed a sitter and whilst we shouldn’t blame him for being static given his age, the chance he did miss had to be a goal in order to get his side level. Two goals in the second half did save his performance and he forced an own-goal to get Milan up to three goals.

Theo Hernandez picked up an assist and didn’t have a bad game overall, but everything changed when he foolishly tried to dribble himself out of trouble in front off his penalty box, losing the ball and allowing Vlahovic to seal the win with a fourth goal for Fiorentina.

The Frenchman was brilliant for France during the international break, but failed to make the impact he can against La Viola as his decisions were costly. He has made that particular mistake before and he needs to be more tactically savvy especially in a position where you lose the ball means a shot on target for the opposition. There are no excuses for the mistake that ended up destroying all hope.

5. A look at the opposition

Whilst the result is bitter to reflect on, we have to acknowledge the good performance by Dusan Vlahovic because his name is heavily linked with Milan and the Serbian could be a potential long term replacement for Zlatan. So on that note, Vlahovic was a constant threat as he made Kjaer’s life hell with the Dane committing a couple of fouls in order to stop the striker.

Vlahovic managed to get himself on the scoresheet twice and both goals were quite impressive and if Maldini and Massara were looking for confirmation, we could say the 21-year-old passed his audition.