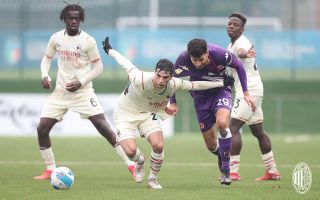 AC Milan Primavera’s cup run ended in the round of 16 as they were beaten 4-3 by Fiorentina after a dismal first half performance.

Giunti’s side found themselves 4-0 down at the break after what was a calamitous opening 45 minutes and not what they were hoping for to follow up the 3-1 defeat against Cagliari at the weekend which keeps them in a battle to avoid the drop.

With the game still 4-0 heading into the final two minutes of normal time, something quite remarkable happened. First of all Emil Roback scored a consolation in the 89th minute, then Nasti netted and Robotti added another in additional time to make it 4-3.

It was a frantic finish to the game but ultimately it was too little too late as the horrendous first half condemned the young Rossoneri to a defeat that knocks them out of the cup.