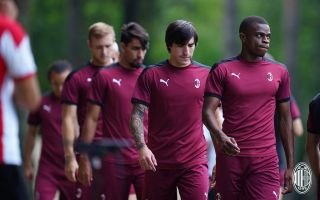 The 2020-21 season is almost upon us after a shortened preseason due to the COVID pandemic, one which has just about allowed us to catch our breath.

At the time of writing Milan have made five big transactions during the closed season. Zlatan Ibrahimovic signed a new one-year deal, Ante Rebic and Simon Kjaer have joined permanently, while the club have welcomed Brahim Diaz, Sandro Tonali and Ciprian Tatarusanu.

There are also the likes of Emil Roback, Pierre Kalulu and Lukas Bjorklund that have signed deals with the Rossoneri, but those are considered to be more Primavera-related moves.

With that being said, here are five bold predictions that we have for Milan heading into the new season…

1. Ibrahimovic will score 20 goals or more

Some may argue this isn’t so much a ‘bold’ prediction but rather a show of blind faith in a player who will turn 39 this year, yet the fact is Zlatan Ibrahimovic scored 11 goals in all competitions last season despite arriving half way through and joining a group that was in a tough place psychologically.

With a preseason under his belt and some nice matches to start the season, the Swede has the perfect chance to hit the ground running and set the tone for the new campaign.

2. Calabria to seize the right-back spot

This one perhaps doesn’t seem too left-field, but it is important to remember that Davide Calabria played second fiddle to Andrea Conti for almost all of 2019-20.

However, the Primavera product showed good signs towards the end of the season with Conti out injured (again) and he will almost certainly start the season as the first choice right-back, but then he should kick on and become a permanent fixture in the XI, with Pierre Kalulu perhaps pushing too.

3. Colombo to have a Cutrone-esque breakout

There are actually plenty of signs that suggest Lorenzo Colombo is the perfect deputy to Ibrahimovic, in terms of his size, strengths and his playing style.

The 18-year-old has impressed in preseason scoring three times in three games, having seemingly cemented a spot in the senior team after 12 years in the Rossoneri youth sector.

👌 It doesn’t get much better than that from Colombo.

With over 50 games to come this season presuming the team makes the Europa League group stages, keeping Colombo as a deputy should see him get ample playing time and – like Cutrone – he could easily get off to a fast start in Europe against some, with respect, lesser sides.

This hypothesis of course changes if a new striker arrives, but it does not seem to be a concrete idea at the moment.

Hear us out on this one. As it stands, Diego Laxalt is Theo Hernandez’s back-up, meaning he will likely get at least a few games this season.

The way he plays – with his attacking tendencies and functioning almost as a wing-back – suggest Pioli wouldn’t have to adapt his system or the balance of the team that much when Laxalt plays, and the signs in preseason suggest that he can be a more than capable deputy to Theo.

If he plays Europa League games, it might not even be too much to expect some assists or even some goals, too.

At the moment, there is one position in the front four players that seems up for grabs and that is the right wing spot. While Samu Castillejo and Alexis Saelemaekers have both shown their merits, it is understandable that Pioli may turn to a player who offers more attacking output, to further spread the workload.

Brahim Diaz’s arrival from Real Madrid – even though only a loan for now – should not be understated. He is a very good technical forward who has the ideal skill set to thrive in Serie A like Papu Gomez for example.

The obvious route into the starting XI at the moment appears to be on the right, where he would provide a nice contract to Rebic’s raw pace and energy and Calhanoglu’s thread-the-needle style.

6. Tonali to be a starter by the end of the season

Having had no quality back up to Bennacer and/or Kessie last season, Pioli will feel a lot better with Tonali waiting in the wings. The former Brescia star will undoubtedly be rotated in and out of the starting XI to begin the season, given the dominance of the African duo last season, but all it takes is an injury, suspension or dip in form for Tonali to get the gig full time.

Then, it will be up to the 20-year-old to grab his chance with both hands, and we really think he will. Like Bennacer, fans should expect Tonali to excel even more in a better side.

7. Milan to reach a final

There will be a separate article about some more specific predictions on where Milan finish, who will be the top scorer and all that jazz, but we end this one by predicting that the Rossoneri will make it to either the Europa League or Coppa Italia final.

Reaching the Italian Cup final would involved beating Inter in the quarters (again) which would be immensely satisfying, while the Europa League will likely have some tough sides but represents an immense opportunity to turn some heads on the continent again, like the Nerazzurri did last season before losing to Sevilla.

What we really hope above all though is that the team continues to play fast, progressive and exciting football and that the chemistry among the squad continues to grow from a fantastic end to least season. Those things would ensure we once again have a team to be very proud about.