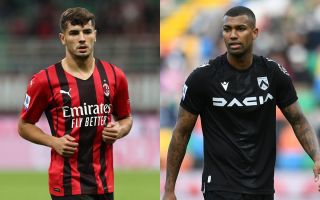 Later tonight, AC Milan will take on Udinese in the 17th round of Serie A, hoping to bounce back from the mid-week loss to Liverpool. On the other hand, they will be looking to continue their winning streak in the league.

The Rossoneri have three games left until Christmas and currently sitting at the top of the standings, they want to claim all nine points. They still have many injuries, but tonight they have to be considered the favourites.

Of course, it will be important for the Milan players to win the individual battles and we have highlighted the five key ones below.

Starting at the back, from Milan’s perspective, we can expect to see a nice battle between Alessio Romagnoli and Beto. The Brazilian striker has decent pace and showed that off against Lazio, when he scored two goals. It’s likely that he will target the Milan captain rather than Fikayo Tomori.

On the flank, more specifically the left one, it will be interesting to see Theo Hernandez taking on Gerard Deulofeu, the former Milan man. Both are very fast and as the Frenchman likes to get forward, the Udinese man will most likely get some space to make use of. The balance, therefore, will be important for the Rossoneri.

It’s not exactly a secret that Brahim Diaz has struggled a bit lately, although with two assists in his last two games. He has very often been out-bodied this season and the same could happen tonight, with defensive midfielder Walace ready to take him on.

And finally, being the only striker available, Zlatan Ibrahimovic will be tasked with breaking down the Udinese back three. Sebastien Di Maio should start in the middle and will thus be the main opponent for the Swede, who wants to add more goals to his tally.