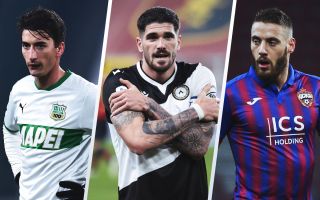 Amidst interest from several top English clubs and a drop in form, Hakan Calhanoglu’s future with AC Milan is in serious doubt.

The attacking midfielder played a crucial role in his club’s sudden improvement after the Covid pause last season, but it now appears that a parting of ways is imminent unless there is a turning point in negotiations.

Stefano Pioli can use Calhanoglu’s upcoming departure to upgrade his squad at a key position, and the Rossoneri have already been linked with several possible replacements. Milan will most likely look to acquire a classic number ten, a player who can both create chances as a second striker and help connect the two deep-lying midfielders with the wingers and the forward.

Just as we did with right wing targets, we have profiled some players who could be useful to Milan’s cause…

This may appear somewhat unrealistic option, as Rodrigo De Paul is set to become one of Serie A’s most-coveted footballers in the upcoming transfer window, as clubs like Barcelona, Inter and Liverpool are all vying for the 26-year-old’s services.

The Udinese midfielder has been the sole spark for his side’s lacklustre attack the last three seasons, picking up 24 goals and 20 assists while surrounded by lesser talent.

De Paul is a classic central attacking midfielder and excels at combination play and creating space in the final third. The Argentine typically looks to progress the ball up the pitch and create scoring chances in the box, but he is also perfectly capable of playing key passes through the opposing backline from a deeper position.

Due to his technical similarities to Calhanoglu, De Paul is well-suited to Pioli’s preferred system and could create a deadly partnership with Ante Rebic on the left side of the attacking trident.

Even though he lacks experience at the highest levels of European football, De Paul will be an expensive acquisition for whichever club ultimately wins his signature. If Milan were to outbid their competitors for him, the club would put itself in position to make a legitimate push for the Scudetto next season.

Compared to a talent like De Paul, Atalanta’s Matteo Pessina is younger, cheaper, and an altogether more realistic option to replace Calhanoglu. After having a breakout season on loan with Verona last year, Pessina returned to Bergamo and has become a key cog for Atalanta’s league-leading offense.

Pessina is nominally an attacking midfielder, but the 23-year-old plays more as a facilitator, staying in the centre of the pitch and looking to find passing lanes for Atalanta’s forwards and wingers. A majority of his time on the ball is spent outside of the box in the opposing half, where he can provide the attack with deep support and play dangerous balls into space near the penalty area.

The midfielder’s 7 goals with Verona were an aberration, coming mostly from point-blank shots or tap-ins. Pessina is not a player who is going to record goals and assists often; he has just 3 goals and 6 assists in the 4,824 non-Verona minutes of his young career.

At his age, Pessina still has plenty of time to develop creative tendencies, and he would be surrounded by other young, high-potential midfielders at Milan. In Pioli’s 4-2-3-1, he could rotate well with Franck Kessié and Ismael Bennacer in offensive positions, and would be able to provide solid distribution to Zlatan, Ante Rebic, and whoever lines up as the right winger.

Another well-rounded option is Olympique Marseille’s Florian Thauvin, who has been on Milan’s short list since last November and was a part of France’s World Cup squad in 2018.

The midfielder has been one of the best players in Ligue 1, scoring 86 career goals along with 44 assists. At 28, Thauvin has already spent 9 seasons in the French league, has the fourth-most appearances in Marseille history and is the 20th on the Ligue 1 all-time goalscorers list.

According to Statsbomb, Thauvin likes to play wide right when the ball is played out of the back, but he will also float inside and look to switch the field. The 28-year-old has an average shooting percentage, but excels at creative dribbling and finding open team-mates in the attacking third, so he could function very well as more of a conventional No.10.

Thauvin’s market value has dropped considerably since he missed all of the 2019/2020 season due to injury, but if the Frenchman can regain his 2018 form, when he was fourth in Ligue 1 in goals plus assists, he could become a reliable contributor and a quality replacement for Calhanoglu.

The Serbian midfielder has been a crucial part of the Neroverdi’s overachievement the last four seasons, helping to facilitate play with accurate passing (80% pass completion rate) and shot-creating actions (3.99 per 90).

Djuricic isn’t going to often spark an attack with his pace or dynamic dribbling. Instead, the 29-year-old has proven to be a crucial component to Sassuolo’s outstanding build-up play through his accurate passing and his constant movement across the pitch, always providing an option to whoever possesses the ball.

The major downside to buying Djuricic is his age. At 29, the midfielder is nearing the end of his prime and is certainly not a viable long-term option for the Rossoneri. He also does not fit all of Pioli’s needs for a central attacking midfielder and may be best-suited as a bench option for a club of Milan’s caliber.

Croatia international Nikola Vlasic is an intriguing option for the Rossoneri. The 23-year-old was a bust at Everton, but has since emerged as one of the top players in the Russian Premier League, registering 28 goals and 15 assists for CSKA Moscow.

Vlasic is attacking-minded and wonderfully versatile; he prefers to play as a traditional No.10, but he can also line up as a winger or as a forward. When deployed as an attacking midfielder, Vlasic plays high up the pitch like a second striker and often makes dangerous overlapping runs with CSKA’s number nine.

Rebic and Vlasic are quite similar both in their physical and technical profiles, and if Vlasic was bought by Milan, he could potentially fill three roles: attacking midfielder, substitute for Rebic, or right winger playing on the opposite flank to his compatriot.

CSKA has refused to negotiate below their star midfielder’s buyout clause – a reported $42 million – making Vlasic an expensive and risky option. Stefano Pioli and Milan’s front office would have to be certain that Vlasic would fit Milan culturally and systematically.

🤔 Who do you think Milan should sign? Or is Calhanoglu the right man? Tell us below 👇

*All stats are courtesy of FBref.com