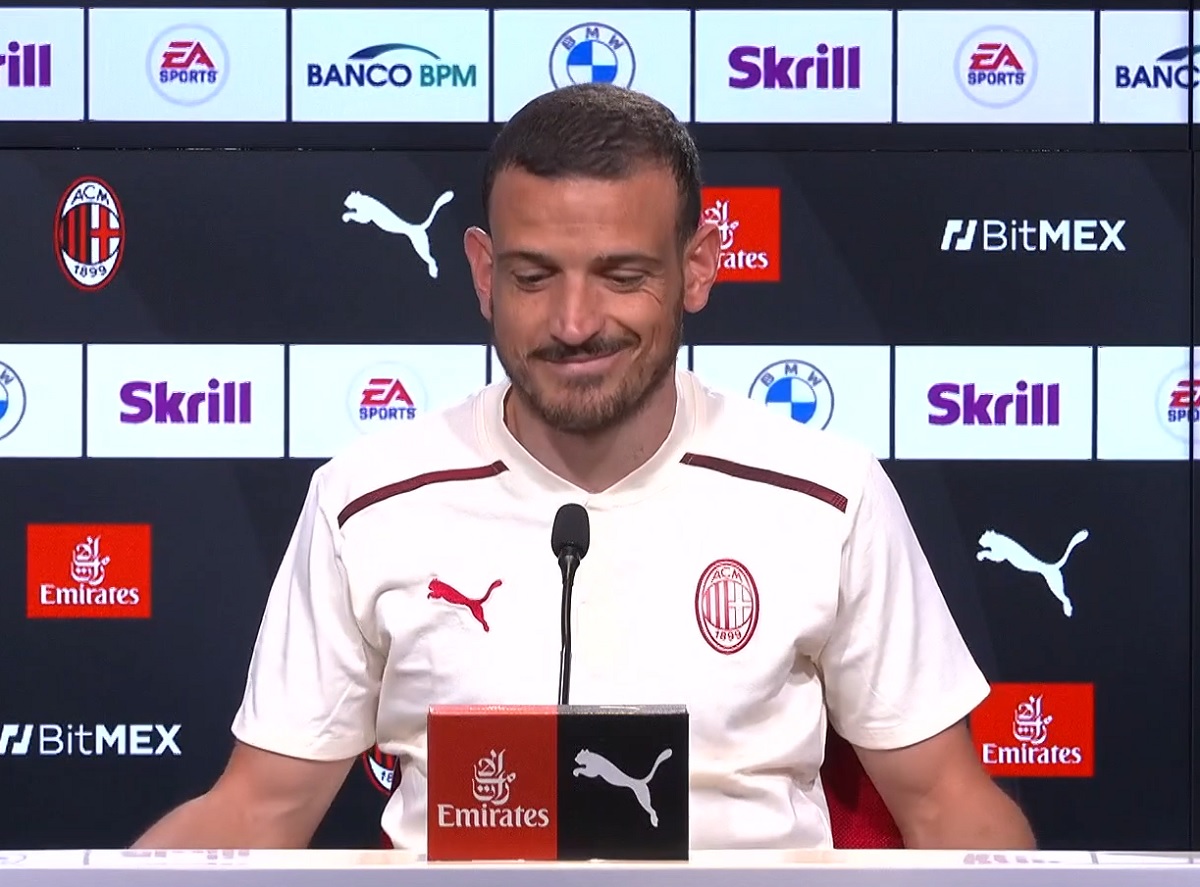 Alessandro Florenzi is officially an AC Milan player, as confirmed by the announcement earlier today, and he’s eager to get started. This afternoon, he spoke at his presentation as he was unveiled to the media.

The versatile Italian will wear the No.25 with the Rossoneri and he’s expected to be a useful player for Stefano Pioli, knowing that he can play in many different positions. And, of course, he has a lot of experience.

During the presentation, as transcribed by MilanNews, he spoke about signing for Milan and what his position could be for the time. He also touched on many other topics, which you can read in full below.

AC Milan played their last Champions League match in 2014. You’ve always played it ever since. Isn’t that perfect?

“It must be Milan’s minimum objective to be in the Champions League with stability. The fans want it, the team wants it and the club wants it.”

What contribution will you bring to make Pioli forgive you after the goal you scored in the Rome derby (jokingly)?

“I’ll try to help the team with attitudes, on and off the pitch. This is the way I know to try to earn the coach’s trust.”

Did you find a different club in Milan than the others?

“I found a club prepared and set up very well. Over the years I have been treated by very organized clubs and Milan are one of them.”

What can you bring into this system?

“I talked to the coach this morning. It won’t take long to settle down. I have always made myself available to the teams I have played for and I will also do so in Milan. I will play anywhere, the important thing is to help the team reach the goals.”

Can you play both as a full-back and as a winger?

“The coach knows me very well. I am available to play both further up and at the back. I have characteristics that can go well with the game of Milan and the coach will make his choices.”

Do you have a desire for revenge against other teams?

“I don’t want revenge. Milan wanted me because they know I can give a lot and support to the boys. I know that I will give my all for the cause and I know I can do well. There are teams that make their choices, I respect the choices of PSG and Valencia as well as that of Roma which was made two or three years ago. I accepted this decision reluctantly because everyone knows that I’m a Roma fan. Now I’m here with a club that has faith in me and this is the most important thing for me.”

Why didn’t the other teams bet on you?

“Valencia didn’t bet on me for economic reasons. PSG have taken on another very strong player in my role by spending a lot. Roma made a technical choice, even if in my opinion it is not. I have put these experiences behind me. Now I’ll let the pitch speak and give everything for Milan.”

“What unites them are the high-quality young players in the team. The coach is present and prepared. Italy and Milan play differently but this does not mean that one is a winner and the other is not.”

The parallel between Maldini and Totti is important. What did you feel and what is your relationship with Massara?

“Ricky saw me grow up. I knew him as a child. Paolo is untouchable. It was a great emotion and gave me the same feeling as when I met Totti and De Rossi.”

Can Milan fight for the Scudetto and can the competition with Calabria be good?

“In a team like Milan, it’s normal to have competition. It’s a strong team and all seven big teams can compete for something important. I would think game after game, trying to win them all even if it won’t be easy.

“I can still give so much, I am convinced of it. Milan gave me great confidence. When I arrived I captured positive energy and this can generate great things. We will have to be positive and bring home our goal.”

Have you already talked to Romagnoli?

“Yes, we talked about this and that. We will have the opportunity to talk again also because we are already focused on the match against Sampdoria on Monday. I have already seen today that the spirit is right.”

What will be the emotions of playing at San Siro as a Milan player?

“After a year and a half without fans, going back to the stadium will be great. We can’t wait to take the field and show what a great team we are. We want to show our qualities.”

Do you have a favourite position on the pitch?

“I like to play. I love football. It is a passion that I have transformed into a job. It does not change my position, I like to play.”

What is your current physical condition?

“I’m not ready for 90 minutes yet. I have trained differently in recent times compared to the usual rhythms. I will need some time to be ready for a full game. I will be ready from here shortly but I am available to the coach.”

How stimulated are you by the competition from Calabria?

“Davide is a strong player. There are many games and the coach will know how to choose the right man for that match. The competition will be good for him and me. To have a great season you need 22 starters and there will be competition in other roles.”

Do you feel like a stronger player since your last experience in Italy?

“I had a great season with PSG even though we didn’t win the championship. I don’t have to go back to my form of 2-3 years ago but I have to continue to grow as I have always done in recent years.”

What other factor led you away from Roma?

“I feel that my farewell to Roma was not just a technical choice. But I still haven’t understood why.”

It remains to be seen if Florenzi will be called up for Milan’s season opener against Sampdoria on Monday. He trained with his teammates at Milanello earlier today and might be ready enough to make the bench.