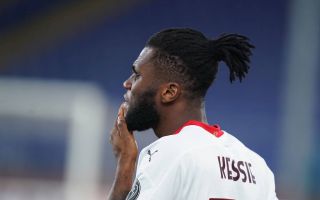 Formation evolution and a changed role: How Kessie has become one of Serie A’s best midfielders

In 2019, if Milan fans were asked who should have been the first player to be sold, Franck Kessie would have been on the top of many people’s list.

The January transfer window came along and there seemed to be interest from English clubs and Inter who were keen on a swap deal between Kessie and Vecino according to numerous sources.

The management decided to keep the Ivorian and with other personnel changes in the squad, Pioli changed to a 4-2-3-1 formation partnering Kessie along with another defensive midfielder in the form of Ismael Bennacer.

Today, Kessie is one of the most important players to Milan’s high pressing system and has become somewhat of a cult hero. He brings steel and drive into midfield which has been a game changer for Milan in their recent renaissance. It brings to questions what has caused this change and what is Kessie’s new role.

It starts from when Milan shifted to Pioli’s more familiar 4-2-3-1 – which changes to a 3-4-3 in attack as he used in his days at Fiorentina. However, Milan were used to a 4-3-3 module under previous coaches and Pioli tried to incorporate his tactics into the 4-3-3 to keep the continuity going.

However, his module was unsuccessful and it culminated in that 5-0 humiliating defeat to Atalanta leading to a re-think supported by Maldini and Boban with personnel supporting his principles of play.

Pioli, in an interview to The Athletic, later revealed that he instructed his staff to study Hansi Flick’s Bayern Munich. Bayern plays one of the most complete game of pressing in Europe and Milan wanted to successfully incorporate that in their style of play.

Bayern last season played in a 4-2-3-1 with the double pivot consisting of Thiago (now at Liverpool) and Goretzka. Goretzka was a physical box-to-box style player while Thiago was a quasi-deep lying playmaker forming passing triangles with centre-backs helping to play the ball out of defence and then spray it forward to the forwards to build attacks/start counter-attacks.

In Milan these roles are fulfilled by Bennacer and Kessie. While Kessie is the box-to-box man, Bennacer takes on the role of playing as a quasi-regista. Speaking the common language of French, Bennacer and Kessie’s good chemistry has been very pivotal in Milan’s press as well as counter-press.

The role of Kessie

With concise roles handed by Pioli, Kessie is the muscle of the team. This is not to undermine Bennacer’s physicality, but Kessie is asked to assert his physicality over the opposition’s midfield and keep a tight rein on their creative players.

When Milan negate the attack of the opposition and Theo Hernandez sprints forward, Kessie sits back as the third centre-back to prevent counter-attacks if Milan lose the ball.

A vital part of Kessie’s role is to initiate the press. At first Milan played a very physical press, trying to crowd out the opposition player in possession by pressing in triangle formation.

With more games to play this season, Milan use a more horizontal press as well as cover shadows to preserve energy. Cover shadows are basically cutting off passing lanes of the player in position and intercepting the passes.

Horizontal pressing entails pushing teams towards the wide areas of the each using the side-line as an extra man. As soon as the opposition get the ball, Kessie initiates the press and then Theo or Romagnoli along with the Rebic and Calhanoglu push the opposition team towards the touch line either forcing the ball for a throw or force the opposition to try a risky pass and concede possession.

One of Milan’s main idea to build-up play is to switch play. They suck their opponents into a particular wing and then switch play to the wings to catch out the opposition. When switching play Milan use their midfield pivot very often.

When Milan played a 4-3-3, Kessie’s role was quite different to his current one. Playing as a wide midfielder in a 4-3-3 – or mezzala as the Italians call it – Kessie’s role had additional responsibilities of building up play, creating chances and finish off moves.

As he is not the best decision maker in the final third or a creative midfielder, this role seemed to not utilise Kessie very well especially when he kept getting thrust into wide areas quite often with Suso expecting a cut-back.

And there were mistakes galore. From his big miss against Torino to poor decisions in the final third of the pitch the mistakes piled up to sap out his confidence until Pioli switched his tactics to utilise Kessie (and Bennacer) in a better way.

The transformation from zero to hero was indeed quite a huge one and Kessie’s tireless performances alongside Bennacer have become the solid foundation of Milan’s resurgence in 2020.

If Milan can hold their nerve, and not fall unfortunate to injuries then performances like that can take Milan to a Scudetto.