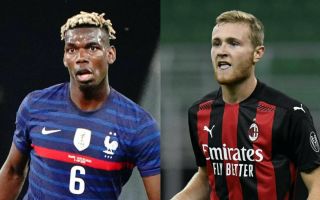 Former AC Milan chief scout Mauro Bianchessi has revealed that he wanted to bring Paul Pogba to the club, as well as giving his thoughts on a number of Primavera graduations.

Bianchessi is the former head of Milan’s scouting activities and is now head of the Lazio youth sector. He was actually Milan’s chief scout for 10 years from 2007 to 2017, a period in which he obviously oversaw a lot of change but also the emergence of some exciting young talents.

He spoke about many different topics from the Rossoneri’s market strategies, the promotion of young players and the future of Tommaso Pobega during an interview with MilanNews.

AC Milan’s choices in this market have been strong. What do you think of the work of the Rossoneri management?

“I have great confidence and esteem in Maldini who I believe is doing a targeted job with a solid owner who is investing a lot in Milan,” he said.

Milan are one of the few clubs that have confirmed their leadership. Could it be an advantage for next season? Where do you think Pioli’s team can go?

“Last season was to be framed. They fought for the Scudetto for a while and have confirmed themselves as the second force in the league. Keeping the manager and the frame of the team is a smart move even if it will be difficult to repeat.”

Among the players to be kept for next season is also Gabbia. What are Matteo’s best qualities?

“Matteo is a good guy with a great will and spirit of sacrifice that allows him to make up for some shortcomings. He has improved a lot in recent years and I hope he can continue to do so.”

Did you expect such an important growth in performance from Davide Calabria?

“Davide is strong. Today in Italy there are no phenomena in that role and he is among the top four Italian right-backs. He is a boy linked to the Milan shirt. An example for the younger players.

“When I signed him he played up front. Then we transformed him into a midfielder and then a full-back where he crowned himself as a real player. I hope he can become the deputy of the Italian national team.”

Among the potential protagonists could be Tommaso Pobega. What are the aspects that you like the most about the player?

“Tommaso is my favourite player. Will, sacrifice, humility complemented by an important physical-athletic structure, good technique and that talent of insertion from behind that allows him to score goals. I hope he stays at Milan and carves out his space. He can only improve.”

Could you tell us the name of a young talent you were close to signing and who then, due to a series of events, failed to make it to the Rossoneri?

“We signed many, others for various reasons we did not get there. When Pogba was not yet Pogba, I tried and I was also able to negotiate with Galliani for 8 months with Juve but at that time the ownership for various reasons he decided no. Too bad.”