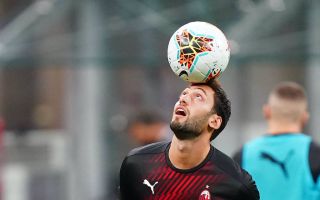 In 2017, Max Mirabelli and Marco Fassone made eleven signings at Milan, starting the Chinese revolution with a bang. One of the players they signed was Hakan Calhanoglu, who did really well this past season.

The Turkish international experienced his most prolific season in Italy since his arrival, bagging eleven goals and nine assists in all competitions. In other words, he was a very important player for Stefano Pioli’s side, playing as the attacking midfielder.

In an interview with TMW Radio, as cited by MilanNews.it, former Milan sporting director Mirabelli was asked about Calhanoglu’s amazing form since the league restart. He made it clear that the best is yet to come from the 26-year-old.

“Calhanoglu is a very important player, at the time we had a really young team, the youngest in the league. He hadn’t played for seven months. He came to us without knowing the languages ​​and his new teammates.

“He needed time to settle in. And I’ll tell you this: the best is yet to come, because how he kicks the set pieces, in my opinion, there are very few that do,” he stated.

According to Corriere Della Sera (via MilanNews.it), Milan are working to renew Calhanoglu’s current contract, which will expire next summer. By the looks of it, the two will continue together for many years to comen after the recent success.

READ MORE: Milan prepare for more sales after Rodriguez – all the players at risk