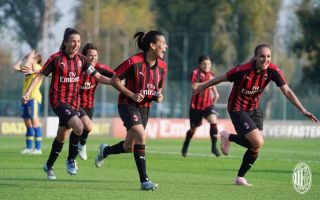 Thaisa spent one season at Milan before transferring to CD Tacón (Real Madrid).

The AC Milan Women are looking to strengthen their squad ahead of next season. They would like to do so to make a real run at the scudetto. They would also like to qualify for the Champions League as well. In Spain, CD Tacón (better known as Real Madrid), are looking to thin out their roster, and Thaisa would appear to be one of the players on the chopping block.

According to Radio Marca, the Brazilian has two options in mind for her future: either she can return home to Brazil, or return back to Milan.

However, Laura later deleted her tweet on the matter. It is not known why she deleted the tweet, though it does cast doubt on Thaisa’s possible departure from Madrid.

Furthermore, Thaisa’s agent later dismissed the rumours as ‘fake news’. Thaisa has one more year left with the club, and in his words, she makes ‘five times more’ at Tacón than she did at Milan.

Once the contract is over, however, anything is possible. Including coming back to Milan.