Milan’s Scudetto hopes were all but ended on Sunday as Napoli ran out 1-0 winners on a frustrating night at San Siro, in a game where the Rossoneri were the favourites with bookmakers before the game, so it was a shock if you follow the best football betting tips.

Both sides had chances to open the deadlock, but it was Matteo Politano who scored the only goal of the game early in the second half, finishing with composure from the left side of the Milan box past a helpless Gianluigi Donnarumma after the ball was surrendered in midfield.

Cervellera spoke during the programme ‘Replay’ on MilanNews and did not hold back on his criticism of Pasqua, who he believes lost control of the game fairly early in proceedings.

On the fact he was appointed in the first place, he said: “It didn’t seem to me the most suitable match to make the rotation between the referees.”

There was a funny moment in the second half when Theo lunged in on Osimhen and in the aftermath Pasqua went tumbling to the floor having been clipped by a Napoli player, not deliberately of course.

“I wanted to frame the Pasqua performance when he fell after Theo’s foul. He proved hesitant, right from the start. He reversed several fouls, also easy to perceive. He left room for indecision and uncertainty. He lost a handle on the game in the 30th minute when he didn’t give a yellow card to Demme, that was quite easy,” Cervellera added.

There was an incident in the closing stages of the game in which Theo went down having been at best scraped and at worst impeded by Bakayoko inside the box. Softer penalties have been given – as the replays showed – and Cervellera believes it was a penalty.

On the contact between Theo and Bakayoko, he added: “In live it seemed that Theo had accentuated, but when you go to the VAR that’s a penalty kick. Theo Hernandez gets there before Bakayoko, who then hits him.”

Not only that, but in the 69th minute of the game at San Siro Theo Hernandez went down in serious pain after a challenge from Di Lorenzo on the edge of the area, winning a free-kick. A yellow card was given to the Italian full-back, but as the image below shows there were studs on display and it could have been a nasty injury and a red card. 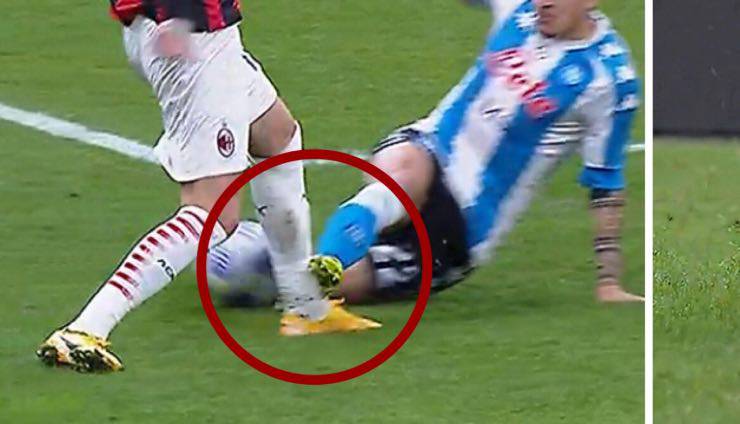