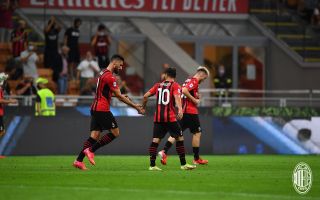 Free-kick specialist and a first since 2004: All the key stats from Milan’s win over Cagliari

AC Milan made it six points out of a possible six collected to start the season with a resounding 4-1 win over Cagliari in front of over 32,000 fans at San Siro.

Milan scored four times in the first half against their opponents from Sardinia courtesy of a Sandro Tonali free-kick, a deflected Rafael Leao shot and a brace from Olivier Giroud.

Below are the best stats from the game, courtesy of the club’s official website…

➤ Milan have won their first two league games of the season in two successive Serie A campaigns for the first time since they did so under Carlo Ancelotti in 2002-03 and 2003-04.

➤ By the 40th minute, Milan had taken their eleventh shot of the match, as many as they had in the whole 90 minutes against Sampdoria on matchday one.

➤ The Rossoneri scored four goals in the first half of a Serie A fixture for the first time since November 2011, when they did so against Chievo.

➤ Olivier Giroud has become the first Milan player to bag a brace in their very first home match for the Rossoneri in Serie A since Mario Balotelli, who did so in February 2013.

➤ Giroud has become the 15th Frenchman to find the net for Milan in Serie A. The Rossoneri are the team that have had the most French goalscorers in the Italian top flight.

➤ The Rossoneri No.9 has scored a league brace for the first time since April 2018, when he did so for Chelsea against Southampton in the Premier League.

➤ Giroud scored his eighth penalty in the ‘top five’ European leagues and his first since December 2015, back when he was on Arsenal’s books.

➤ Sandro Tonali has now scored two Serie A goals, both of which he netted from direct free kicks (he bagged his first in October 2019 against Genoa).

WATCH: Winger gets ready to sign Milan contract while midfielder arrives for medical