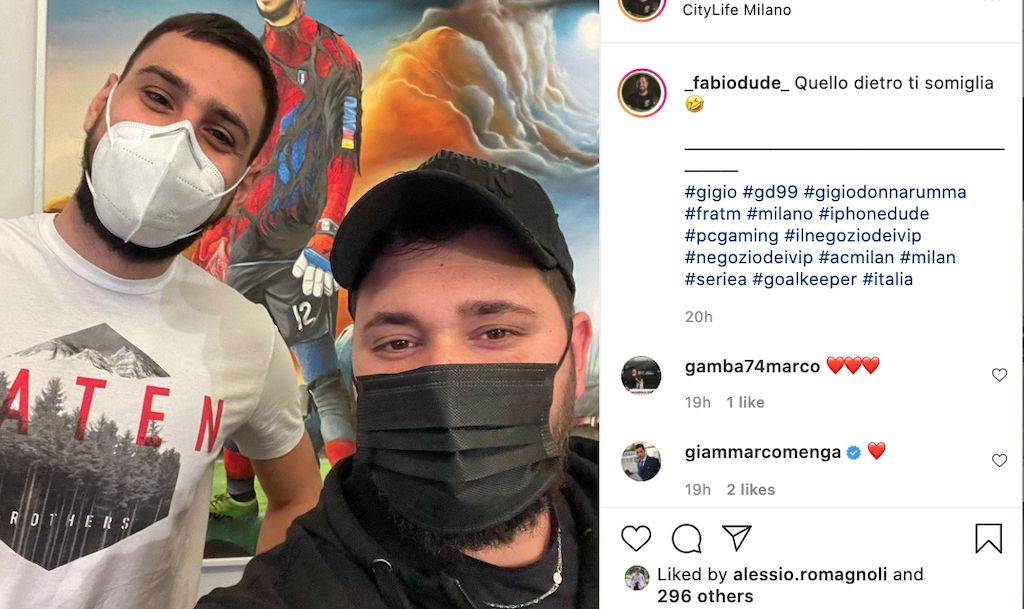 Friend of Donnarumma and Calhanoglu provides encouraging news regarding renewals

Fabio Iacuzio has revealed some interesting information about some of the AC Milan players he knows through work during an interview with MilanNews.

Iacuzio is an IT consultant for some of the best players in Serie A, and he also founded a company called iPhoneDude – one of the few autonomous assistance centres with official Apple technicians, -in Italy.

In recent years he has forged strong relationships with many Rossoneri players such as Donnarumma, Theo Hernandez, Calhanoglu, Romagnoli and many others.

When you can’t watch live football on TV, some like to spend their time playing games like FIFA instead (although Ibrahimovic probably doesn’t) or with technology, and Iacuzio revealed all he knows about the Rossoneri squad.

“I am originally from Naples and in 2004 I went to Milan at the age of 18. I have always had a passion for computer science, at the beginning I mainly dealt with MacBooks because iPhones did not exist yet,” he said.

“Later I got certified in Apple and I became one of the first certified technicians in Italy. I immediately thought that Apple could become popular in Italy and I specialised on this brand also because, as a computer system administrator, I preferred this software.

“When the iPhone came out in 2008, the opportunity arose to have to do a data recovery for the device of Dejan Stankovic of Inter. I immediately got in tune with him and he started introducing me to the rest of the team from Maicon to Chivu.

“At the time there was only Facebook as a social network and I created a page to document this work and I was branded as ‘Inter’s IT technician’.

“A few years later I had the opportunity to meet Menez at Milan because on New Year’s Day at 8pm, he and his girlfriend had some problems with a phone. I get up from the table, go to open the shop and fix the phones. From there, therefore, the collaboration with the Milan players began.”

He then discussed how he became friends with Gianluigi Donnarumma.

“I met Gigio in 2015 when he was in the Milan Primavera, over time we discovered we have many friends in common. He was very young at the time, he had yet to make his Serie A debut, and I was known as ‘Gigio’s friend’.

“Then comes the day of the match against Sassuolo, he makes the performance we remember and from there comes the boom in my business too. To give you an example: after the debut in the national team Donnarumma put a post with me and this received 100,000 comments and about 200,000 likes.

“Old friends starting calling saying I was on Sky Sport and SportMediaset and from there my shops started to storm. A sincere and true friendship was born before Gigio was the Donnarumma we all know.”

What kind of man is Gigio in his everyday life?

“He is one of the best guys I have ever met, of a unique goodness. He is very private, does not like nightlife and is very quiet. Gigio loves the Playstation, he loves being with his girlfriend and eating a good pizza in company,” he said.

“He is a very simple person. He never acted like he was a star. I met many crazy players and Gigio is the exact opposite. Donnarumma is still a person capable of going to eat in humble restaurants.

“This friendship between us is also strange: I was an Inter fan and he was an AC Milan fan since he was a child. During the derbies we tease each other on WhatsApp. He then introduced me to Belotti, Buffon and Bonucci and therefore I practically assist almost all of Serie A. ”

You are also assisting Theo Hernandez…

“He is obsessed with technology. Donnarumma is obsessed with apple and wants to learn how things work. Theo, on the other hand, is really a fanatic of any brand. He is always very kind, polite and even sometimes brings t-shirts or other gifts.

“He comes to the store as smoothly as Gigio and Calhanoglu. There is a relationship of brotherhood with Hakan, so much so that I even made him visit Naples.”

About Calhanoglu and Donnarumma…

“With them I talk about everything, absolutely everything, both on the field and off the field. For example, when Donnarumma had to renew in 2017 and the negotiation was taking a long time, some unpleasant events occurred such as the breaking of a shop window, only because I was considered his best friend.

“At the time, however, he always confessed to me that he wanted to stay. Gigio is truly Rossoneri inside, he knows all the songs of Milan and has all the photos of the historic teams. Hakan is very happy at Milan.

“He suffered at the beginning when he played on the wing because he could not perform as he wanted. He kept repeating to me that he could not play as he wanted because running on the outside tired him and made him lose his lucidity. When Gattuso was there, Leipzig wanted him but in the end he decided to stay thanks also to Rino.”

“Footballers are very attentive to privacy. They trust me and ask me to pay attention to certain factors. My shop staff is selected. I manage the players and they follow the shops.”