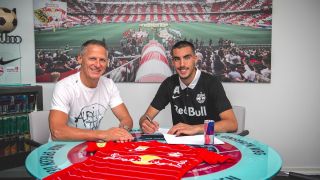 AC Milan are one of the teams interested in signing striker Roko Simic from Red Bull Salzburg, a report from Croatia has claimed.

Roko is the 18-year-old son of former AC Milan and Inter defender Darijo Šimić and has been with RB Salzburg since the summer, but they decided to send him on loan to their development team Liefering where he scored seven goals in 10 appearances.

According to Net.hr, Salzburg decided to recall Simic and add him to their first team, and he could make his debut in the Champions League on Wednesday. In the meantime, a number of Europe’s top clubs have also taken note of his exploits.

The report mentions that Real Madrid and Milan are interested in signing the teenager, and now the news has arrived from England that two London giants – Arsenal and Tottenham – have joined the race.

Calciomercato.com recently reported that Roko Simic – who was born in Milano – would like to return to play for Milan, as he confirmed over the summer: “Milan with Dinamo Zagreb are my greatest love. I dream of wearing the Rossoneri shirt.”