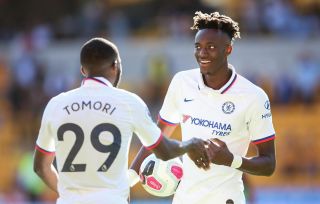 From England: Milan alerted as Chelsea put €46m forward up for sale – he could reunite with Tomori

Tammy Abraham could join Fikayo Tomori at AC Milan as the Rossoneri are interested in signing him from Chelsea, a report claims.

According to the latest from the London Evening Standard, Milan could ‘offer Tammy Abraham a way out of Chelsea’ and rival West Ham United for the England striker. The Rossoneri are among the clubs who have been alerted by Thomas Tuchel’s handling of the 23-year-old, as he is struggling for playing time and opportunities.

Chelsea will apparently ask for a fee in the region of £40million (€46m) if he does depart, because Tuchel wants a top class centre-forward ahead of next season with Romelu Lukaku, Erling Haaland and Sergio Aguero on his list of targets.

Chelsea’s asking price is said to be a ‘major obstacle’ for interested clubs, especially West Ham, while Leicester are another side who could enter the race. The report does go on to mention that Tomori’s loan move could be made permanent at the end of the season for €28m.