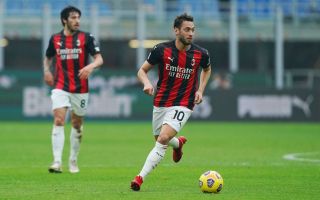 Newcastle United are the latest team to be linked with AC Milan playmaker Hakan Calhanoglu via a report from England.

According to a report form Chronicle Live, Newcastle scouts are keeping a close eye on Calhanoglu’s situation as they are attentive to potential free agent opportunities that could strengthen their squad.

Money is expected to be tight for the Premier League club over the coming months as uncertainty looms over their ownership situation, but the idea that Calhanoglu would swap potential Champions League football for a relegation battle seems unlikely.

Calciomercato.com recently reported that the Rossoneri management are moving forward with Calhanoglu’s renewal and have a meeting set with his agent Gordon Stipic.

The aim is to try to further reduce the distance between the parties from an economic standpoint which has dropped but is still present. Milan are offering €4m net per season to the former Bayer Leverkusen star, while the Turkey international asks for €5.5m and can go down to a minimum of €5m.