It was back in January 2019 that it became official: AC Milan had purchased Lucas Paqueta from Brazilian club Flamengo for a fee of €38.4m, making him one of the most expensive players in the clubs transfer history.

He started off in style. Flicks, tricks and defenders left in splits meant Paqueta was dancing his way into feeling comfortable in Serie A, and the concerns about the league’s demanding nature were quelled.

However, once Gennaro Gattuso left as head coach and Milan appointed Marco Giampaolo, things started going awry. The now-Torino boss infamously made the remark that Paqueta ‘needs to be less Brazilian’ which surprised many.

Paqueta, however, took a cheeky swipe back at Giampaolo on his Instagram saying he knows no other way and is ‘proud to be Brazilian’. Fast forward to September 2020, Paqueta is on the cusp of leaving to Lyon whilst being labelled by many as Milan’s most expensive flop.

His stats in 2019-20 speak for themselves – and not in a good way. Not a single goal registered for the entire campaign and only 1 assist recorded for the 1,199 minutes played.

Here, we take a look at four reasons why Paqueta did not take off at Milan…

1. Lack of pace and physical stature

A very important feature for all modern attacking players is to be fast both on and off the ball. The modern game has involved so much that the overall pace has increased in teams including centre-backs and Paqueta simply was not up to speed with the other horses in the race often enough.

A lack of sharpness and physicality means that his versatility is also affected. A couple of experiments by Pioli to try Paqueta on the wings failed miserably, as the likes of Juventus targeted him by outnumbering him and the 23-year-old was too slow to track back.

With Milan deploying a high press and a high intensity style, it is no surprise to see even Saelemaekers start ahead of the Brazilian as he offers more assurances in all of the areas aforementioned, despite costing just €7m in total. 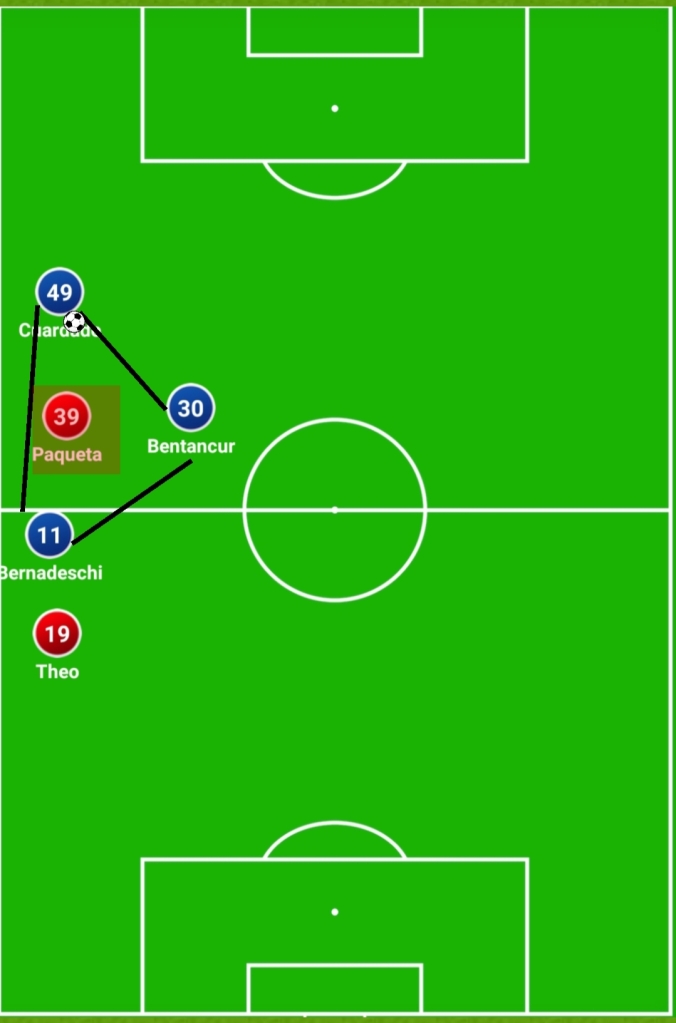 How Juventus targeted Paqueta and exploited him until he was hauled off at half-time.

Perhaps owing to naivety, Paqueta often overcomplicates the play when he is on the ball. With Milan deploying a high press, players are demanded to win the ball back soon after losing it, to pass the ball forward to try and catch opposition defenders out of position.

This requires the ball to be released quickly and decisively, but Paqueta in his stride tries to dribble past more defenders than he can take on and often is cornered. Opposition teams found this out, and it made him very predictable.

This is speculative, but there were various rumours from reliable sources like Vito Angele and MilanNews that head coach Stefano Pioli got tired of Paqueta’s attitude in training, with the former Flamengo star not showing enough to fight for a spot in the team.

It even prompted Pioli to publicly admit Paqueta is out of his project. Once again, to reiterate, this is purely speculative and based on rumour, since we fans cannot know what happens behind the scenes, but contextual clues such as Pioli’s statements and reliable sources mentioning it suggests there is no smoke without fire.

Moving out of your own country across an ocean to a new place with a different language and different culture can be a daunting task for any player.

With compatriot Leonardo leaving Milan at the end of the 2018-19 season, Paqueta did not have anybody senior to help him settle into the squad and into the locality. It may have played a factor in unsettling the player to the extent that he apparently asked to be excluded from playing a match.

Calciomercato.com reported that the Brazilian went to La Madonnina clinic after a game against Udinese for checks following a slight tachycardia, and while his agent Eduardo Uram denied that his client is suffering from any kind of depressive condition, the rumours never went away.

A transfer to Lyon seems the best solution for Milan, Paqueta and ultimately for Lyon too. Milan – for whom Paqueta does not fit into the project – wanted to sell him and re-allocate the money for more burning issues such as the centre-back department.

For Lyon, whose sporting director is club legend and fellow Brazilian in Juninho, will be looking to form a core at the club with Thiago Mendes, Guimares and now Paqueta.

For Paqueta, moving to a club that may suit his style of play and has more Brazilians for him to be-friend seems optimal.