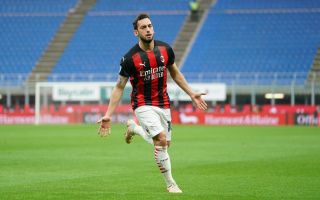 From Spain: Barcelona contact agent of Milan midfielder as Liverpool man could be PSG-bound

Barcelona have turned to AC Milan midfielder Hakan Calhanoglu as a possible reinforcement, according to a report.

Fichajes.net writes that one of the positions that Laporta wants to reinforce is the midfield, and it seemed as though the Catalan club were closing in on signing Georginio Wijnaldum for next season, but everything seems to have complicated due to the fact PSG have made an important offer to the Dutchman worth more than Barcelona’s.

That is why Barcelona have contacted Hakan Calhanoglu’s agent to see if he would be interested in a move. The 27-year-old Turkish midfielder’s contract is set to expire and it does not seem a renewal is imminent, nor are there any other teams who have made a concrete offer to him, with Barcelona willing to convince him to play at the Camp Nou in the event that they do not manage to land Wijnaldum of Liverpool.