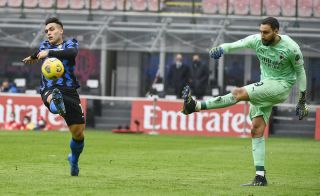 From Spain: Man Utd close deal with Milan star – he will be the highest paid in the world in his position

Manchester United have reached an agreement with Mino Raiola over the signing of Gianluigi Donnarumma as a free agent, a report claims.

According to the Spanish source TF, United have closed the signing of Gianluigi Donnarumma who has not reached an agreement with Milan to extend his stay and will head to the Premier League to embark on a new adventure.

The Red Devils will allow either David De Gea or Dean Henderson to leave the club in the summer and give a starting shirt to Donnarumma, making him the highest paid goalkeeper on the planet in the process, something Raiola was keen on.

Juventus, Bayern Munich or PSG were also chasing Donnarumma but it appears the Red Devils have won the race, or at least that’s what the debatable transfer outlet are reporting.

Donnarumma himself gave an interview with Sky on Friday in which he revealed that he is feeling calm about his renewal situation – another hint that everything is under control and there is confidence – and Sky (via MilanNews) believe he will renew too.