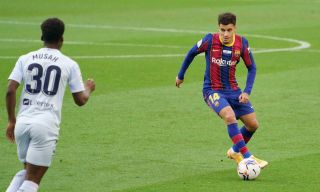 AC Milan are one of the teams attentive to the possibility of signing Philippe Coutinho in a cut-price deal, a report claims.

According to the latest from DonBalon in Spain, Lionel Messi would like Barcelona to sell Coutinho in order to raise funds and strengthen the squad in other departments, given the Brazilian’s less than satisfactory output since his €150m arrival from Liverpool (as per Wikipedia).

Milan are looking for new signing that could raise the level of the squad ahead of a potential return to the Champions League and he would fill the No.10 slot in Pioli’s 4-2-3-1 system well.

The current valuation of Coutinho stands at around €50million and the report mentions that Milan are one of the potential suitors for the former Inter star, along with Premier clubs giants as Tottenham, Arsenal, and Manchester United.

Salary will obviously be an issue for Milan, as he is on over €250k per week as per The Sun and other outlets.