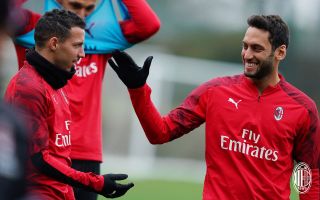 From Spain: Midfielder snubs offer from Man Utd in favour of Milan – €27m deal to be signed

AC Milan and Hakan Calhanoglu have reached an agreement over the extension of his contract, according to a report from Spain.

The headlines are being taken up by both the Super League and the uncertainty that has been generated due to the fact both Donnarumma and Calhanoglu are less than 80 days from the expiry of their contract when they could walk away for free, with no renewal seemingly imminent.

According to TDFichajes, Milan have been trying for weeks to close the renewal of Çalhanoğlu and a long tug of war they have reached an agreement to extend their relationship together. In principle, the player had conditioned his decision to stay based on qualification for the Champions League, but the current standing of the team is enough to convince him.

The Turkish international had a tempting offer from Manchester United but the English side now will have to search the market for a new target. Çalhanoğlu will renew at €4.5m net per season for three more seasons, therefore a €13.5m net and €27m gross commitment.