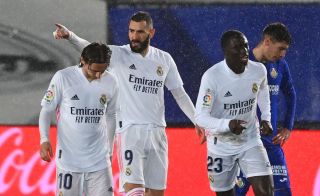 AC Milan have enquired with Real Madrid about the situation of striker Karim Benzema, according to a report from Spain.

According to DiarioGol (via Calciomercato.it), the Frenchman seems likely to leave the Spanish capital this summer and he could take Zlatan Ibrahimovic’s place when he leaves Milan, be that at the end of the current season or in 2022.

Benzema is an elite centre-forward still and could represent a safe bet in terms of being the heir to the Swede, but landing him will not be a walk in the park. There are many teams on the former Lyon man including Juventus, and he has a very high salary.

From an economic point of view it would be a complex operation, which would require a considerable outlay, but the management have shown they are willing to make exceptions when it comes to prove goal scorers, as seen with Ibrahimovic’s arrival and subsequent renewal.