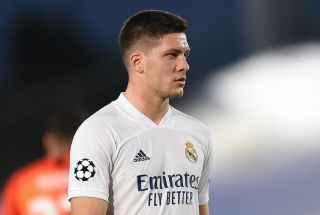 AC Milan have not given up on their pursuit of Real Madrid striker Luka Jovic but face competition from two other clubs, a report claims.

The transfer window may have only closed less than a month ago, but there have been rumours doing the rounds that the Rossoneri could look to move for a striker in the January window given the lack of a natural replacement for Zlatan Ibrahimovic.

According to the latest reports from Spain, Jovic is still attracting the interest of a number of clubs as he continues to struggle for playing time at Real Madrid, and the Rossoneri are one of the clubs that are monitoring his situation.

The report claims that Jovic could finally take into consideration the idea of a move to Milan, which he snubbed in the summer, but there are also Napoli and Monaco who are chasing the Serbia international.

Jovic’s fate now seems obvious while Milan’s stance is that they will evaluate any market opportunity, having shown willingness to bring players in on loan too such as Diogo Dalot and Brahim Diaz.