From the derby to Dubai: AC Milan’s 2022 summarised in 12 iconic images

With 2022 officially drawing to a close, it feels right to reflect on what has been a very memorable calendar year for AC Milan on and off the pitch.

There were a couple of big steps forward in the project as the Scudetto drought was ended after 11 years and a return to the Champions League knockout stages was sealed for the first time since 2013-14.

Away from the field, the accounts continued to improve and the commercial side of Milan moved from strength to strength, and then of course the club shares transitioned from Elliott Management to RedBird.

To help recap the year, we have picked out an iconic photo from each month.

Rafa Leao leads, the others follow. Milan went into their first home game of 2022 without Fikayo Tomori, Davide Calabria, Ismael Bennacer and Rafael Leão in the starting line-up, but emerged 3-1 winners against Roma.

An Oliver Giroud penalty kicked things off and Junior Messias doubled the advantage before Tammy Abraham made it 2-1, and the picture shows Leao wheeling away in celebration after a win that showed the strength of Milan’s collective.

Olivier Giroud, the derby, the comeback. We do not need to say much more, but there is no doubting what such a significant victory against Inter meant in the Scudetto race. Oli G, immortalised.

It’s that man again. If the Inter game was vital in the turnaround that led to the title, then the win at the Stadio Diego Armando Maradona against fellow challengers Napoli was arguably just as big. Another instinctive finish, another winner from the ice man.

All seemed lost at half-time at the Stadio Olimpico against Lazio after Ciro Immobile’s early opener. Milan went into the second half set to lose ground on their title rivals but Giroud levelled things and then a cross fell to Sandro Tonali in added time who sent the huge travelling support into raptures.

Even Zlatan knew how much that one meant, and it was picked out as a turning point by Stefano Pioli too. The boyhood Milanista, decisive when his team needed him most.

Hundreds and thousands of fans poured onto the streets to thank a squad that went above and beyond. Memories were made that will last a lifetime.

With the first team enjoying some well-earned time off, there were still trophies being lifted. Bertuzzo’s U15s became champions of Italy as Francesco Camarda’s goal in the 29th minute secured the Scudetto with a 1-0 win over victory. You might have heard Camarda’s name before. 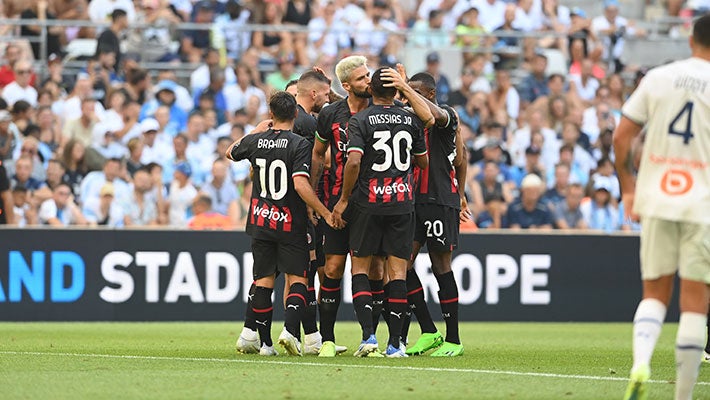 Football returned with preseason friendly action, and probably the most impressive victory – from a list that included wins over FC Köln and Wolfsberger among others – was the commanding 2-0 scoreline against Marseille at the Stade Velodrome. And, we saw the new home kit in action.

Competitive action returned to San Siro with the beginning of the new Serie A season. With the tricolore printed on their chest, Milan beat Udinese 4-2 in front of a packed crowd, and the celebrations with the fans after a thrilling game felt like a continuation of the Scudetto buzz.

With a smile on his face, Leao gets his second of the night in the derby to put the Rossoneri 3-1 up. There were a few iconic images from this game alone, but there’s something about this one which shows just how unplayable he was, and how much joy Rafa took from such a big occasion.

Home wins against Juventus used to be a real rarity, but a second in three seasons was secured on October 8. It was the Brahim Diaz show as he netted a memorable brace, and he soaked up the plaudits under the Curva without his shirt.

Having Champions League nights back was the first big step in the project that starting under Elliott in 2018, and the game against Salzburg – a 4-0 win to secure progress to the last 16 – ended another drought.

The Rossoneri will play knockout football in the competition for the first time since 2013-14, another big step forward in the journey.

With the mid-season break and some rather disappointing friendly results, the last key picture of 2022 is an off-field one but is a good summary of the on-field revival.

Milan announced a few weeks ago that they have renewed their partnership with the airline Emirates and with the new deal – worth €30m per year plus bonuses – the value of Milan’s shirts rose to €80m.

In addition to the €30m from Emirates, a new deal with PUMA will see the club earn €30m per year, with €5m from the sleeve sponsor Bitmex and €7m from Wefox who have a spot on the back of the men’s first team shirts.

It is perhaps the best sign of the virtuous cycle. Win games, earn more exposure, increase revenues, reinvest and continue.