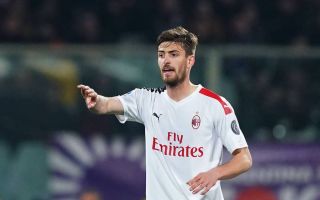 Gabbia on emotion of making debut in front of grandfather, a Milan season ticket holder of 50 years

AC Milan defender Matteo Gabbia has revealed more detail about the emotion of making his debut for the club in front of his grandfather.

This summer Milan are expected to start the youth revolution at the club, with Ralf Rangnick at the helm of it all. Therefore, a lot more space will be given to youngsters, which could help a player like Gabbia.

Just before the Coronavirus outbreak brought everything to a halt, the 20-year-old made four appearances for the Rossoneri. With Simon Kjaer and Mateo Musacchio injured, he was forced to step up and surprised many by performing at a consistent level.

The non-profit organization Cometa organized a web seminar between footballers and very young fans and Gabbia took part in an online chat in front of 200 children, on the theme ‘Sport Changes Lives’.

“We must seek happiness in the things we do. Goals are not always achieved, but it is essential to work with love and passion, without having regrets,” he said (via MilanLive).

He made his official debut for the club during Milan’s win over Torino at San Siro earlier this year, coming on for the injured Kjaer.

On the game, he added: “A great emotion to debut at San Siro. Moreover, in front of my grandfather, a Milan fan and a season ticket holder for 50 years. I owe a lot to my grandparents, they taught me respect and education. From these bases I will always try to do better and mature as a man and a footballer.”