The transfer market is hotting up for Milan with a deal reportedly close for Boca midfielder Rodrigo Bentacur.

The club’s CEO Adriano Galliani, is currently holidaying in Ibiza where he met up with an old friend.

Last night, Galliani bumped into an old friend, the super-agent Mino Raiola. The man who represents Paul Pogba and Zlatan Ibrahimovic amongst others, has jetted out to the Spanish island to enjoy a few days relaxation and came across the rossoneri executive as this picture by Calciomercato.com exclusively reveals. 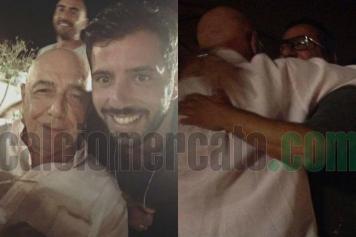 Relationships between the two men have always been good but with so many Milan players already on his books, the two could have much to talk about. One player that could have come up in conversation is 20-year-old Ajax defender Kenny Tete. The Dutchman has been tracked closely by the Rossoneri and of course, is represented by Raiola.

Another topic of conversation could have been attacking midfielder Giacomo Bonaventura; the Italian international declared a few weeks ago that he was waiting for news of a contract renewal, so were the foundations put in place in Ibiza last night?