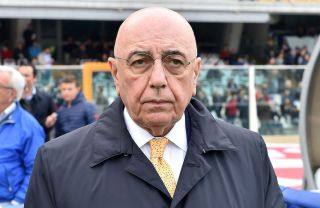 Former AC Milan CEO Adriano Galliani heaped praise on the way the team are playing currently, also giving his thoughts on the difficult contract situations the management have faced.

Galliani was interviewed by MilanNews at the event for the new book by Gianluca di Marzio ‘Almanac of the 2021-22 transfer market’ and gave some thoughts on his old club, where he spent over 30 years and oversaw the most decorated period in the Rossoneri’s history.

“Milan are doing very, very well. Pioli is very good. and he knows how to deal with injuries. A full Milan would be able to fight for the Scudetto, but we don’t say anything to avoid making predictions. The coach was good at finding solutions even when there are important players out,” he said.

There have been rumours that Stefano Pioli could be rewarded for his work with a contract extension, and Galliani hinted that it is virtually done.

“When I leave a club I try not to give advice to anyone and not to say anything, but as a Milan fan I’m happy for Pioli’s renewal because he did very well.”

There was some controversy over the summer when Gianluigi Donnarumma rejected a new deal in order to join Paris Saint-Germain, and Galliani remained diplomatic on the issue, while also talking about a similar situation that might be unfolding with Franck Kessie.

“Gigio is a friend, his family are friends, so I use the right not to answer. Football has changed. The big problem is that, compared to the past, the Italian league is a passing league.

“Italian clubs cannot offer what English clubs offer, so it is normal for a player to finish their contract – especially if a foreign player – and have an interest in playing where they give more money. Kessiè is a good player, we hope he stays with Milan but football continues.”

On Ibrahimovic: “It doesn’t surprise me to see him dominate in Serie A. Ibra is a force of nature. I went to Ibrahimovic in 2010. He emanates strength from every pore, but I couldn’t know he would go on until he was 40, but it was clear that he would have had a very long career. Sanremo? The important thing is that you participate in the Milan goal festival.”

On the new stadium: “It is fundamental, there are no alternatives. A new stadium is needed. At San Siro they can do concerts, matches of the nation, whatever they want.”

On the Champions League: “I was at the match against Atletico and if we had won it completely changes the group. We played well in Liverpool… it ended badly.”