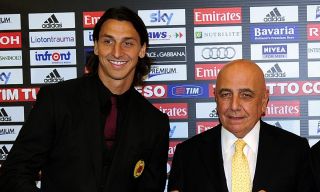 Galliani sends emotional birthday message to Ibrahimovic: “I love you”

It’s a big day for Zlatan Ibrahimovic, not just because he will watch AC Milan take on Atalanta, but also because it’s his 40th birthday. He has received a lot of wishes from many special people, including Adriano Galliani.

The 77-year-old, who was the CEO of AC Milan during Silvio Berlusconi’s ownership, was responsible for signing Ibrahimovic from Barcelona back in 2010. It took a lot of effort but it was certainly worth it, given the success the followed.

Galliani sent a birthday message to Ibrahimovic, as cited by MilanNews, in which he touched on the operation that brought the Swede to Italy in the summer of 2010. He also had some nice words for the striker.

“Dear Zlatan, you know that I admire you as a footballer, as a man, I love you and I loved you with all my strength. I still remember how much effort I put in to get you to Milan in the summer of 2010 and I am happy that you are playing for our favourite team again. I wish you every success, you deserve it, a big hug,” he said.

As said, Ibrahimovic will watch tonight’s game from the sidelines as he’s still recovering from an injury. He should be back for the game against Hellas Verona after the break, at least as things stand.