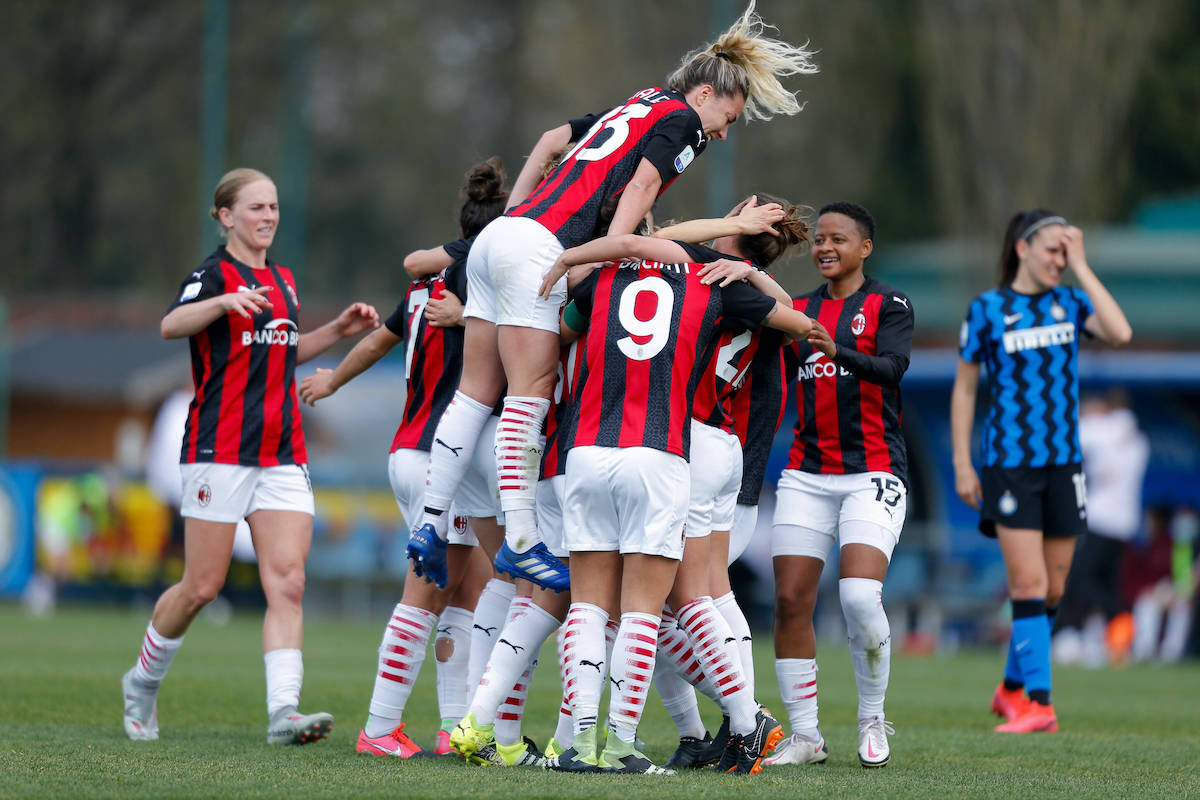 Ganz, Giacinti and Korenčiová react to derby win over Inter: “A clear and well-deserved victory”

The AC Milan Woman beat Inter Milan by a resounding score of 4-1. The team bounced back in a big way from their defeat at the hands of the team in the Coppa Italia Femminile.

It was a win that was pretty much single handedly down to the exploits of Valentina Giacinti, who has now netted on 16 occasions in the league this season and surpassed the 50-goal mark in a Milan shirt, now sitting on 53. She scored four times in 65 minutes this afternoon, the fastest ‘poker’ in Serie A Femminile since December 2018.

Natasha Dowie was impressive as were the midfield trio of Hasegawa, Vero and Jane who all built on their excellent performances last weekend.

The post-match comments that coach Maurizio Ganz, captain Valentina Giacinti and goalkeeper Mária Korenčiová made to Sky and Milan TV are below. All of the comments are courtesy of MilanPress and MilanNews.

A complicated start: “During the first eleven minutes [of the match], we had little comprehension of what was going on. Afterward, Milan gradually grew into the game and I think we saw a clear and well-deserved victory.”

Giacinti’s goal, from his perspective: “There is no need to compliment her further, as scoring four goals in the derby is pretty awesome. We found the right combination, and Dowie played a great game, and we played higher with the fullbacks and wide midfielders and they all did a good job, and we demonstrated that we are competitive.”

The ‘goal’ of the Scudetto: “We will try and fight to the very end, as we’ve only lost two matches against Juventus. Our goal is to win the league, qualify for the Champions League and to win the Coppa Italia.”

Yui Hasegawa and Vero Boquete: “They are two players who play at the highest levels. Vero has made history with Spain, Hasegawa has also made her mark with Japan. They give us a helping hand in training and in the buildup play of the game. Thanks to the team for acquiring two great players.”

Did you save the goals for the Derby? “Yes, I saved them for the derby, as we needed this victory. The goals belong to the whole entire team.”

You played better after the first goal: “[In the first-half of the match] we lacked the clarity we had after the second goal. We need to understand that we are strong so that we can bring the games home safely.”

On the challenge with Girelli to be the league’s top scorer: “Everything is still wide open but the biggest challenge is to qualify for the Champions League.”

On the team’s performance: “I’m happy because we played very well. The three points were very important and today we showed what we can do.”

On the objectives for the season: “I think what we are doing now is great. We want to reach the Champions League next season and try to reach the final of the Coppa Italia.”

On how she’s adjusting to playing for Milan: “I feel very good here at Milan, as it’s my third season here. We are a team and the individual characters don’t matter. I have faith in what I do and I hope to continue going on like this.”