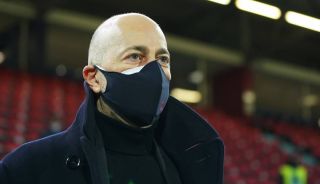 Pellagatti: Gazidis ‘wants to give two gifts’ to the Milan fans upon Italy return – the details

AC Milan CEO Ivan Gazidis is ready to hopefully bring two bits of good news to fans upon his return from America, according to Carlo Pellegatti.

Pellegatti addressed his followers via a YouTube video (via MilanNews) and confirmed that Gazidis ‘wants to give two gifts to the Rossoneri fans, perhaps even before Santa Lucia on 13 December’.

One of them is perhaps not a surprise as it is the renewal of head coach Stefano Pioli until 2024. Gazidis had sensed the potential of this coach and wanted consistency in the project hence why he was given an extension back in July 2020 too when it looked like Ralf Rangnick would be appointed.

The club are aware that it will take some time to bridge the gap to the top European sides as the Champions League has demonstrated, but a Scudetto fight in the meantime is a clear sign of progress.

The other bit of good news is a new sponsor that should soon join the Milan family in Budweiser. The self-proclaimed ‘King of Beer’ – which is based in America – becoming a sponsor means having a worldwide brand alongside the team.