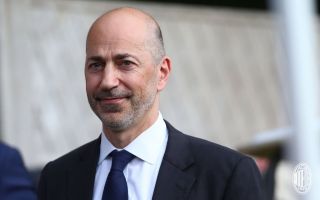 Gazidis on Milan’s ‘young and modern’ vision, the ‘incredible’ new stadium and racism in football

AC Milan CEO Ivan Gazidis has once again spoken out about the fight against racism that football faces, and about the Rossoneri’s new stadium project.

Milan continue to be at the forefront of the equality movement, and today they launched a new manifesto aimed at tackling discrimination.

As confirmed by the club’s official website, the new program highlights the Rossoneri’s long-term vision and furthers its long-standing commitment to ‘sharing the positive values of sports and tackling all forms of prejudice and discrimination’.

Gazidis was interviewed by the BBC about what the future of football should look like, and he stressed it should be one of inclusiveness.

“We see an environment where there is a kind of disrespect, perhaps similar to what we saw in England before the development of the stadiums,” he said (via MilanNews).

“The new stadiums offer an atmosphere in which people they feel safer and more protected. They are technological, more inclusive, you have more diversity in the audience: women, children, people of all races, colours and sexual orientations who feel welcome in stadiums.

“This is what we have to work for here in Italy. I think England has probably worked on these issues more thoroughly and for longer, but that doesn’t mean they are even close to the end of the road.”

On the manifesto launched by Milan: “Denying that we have problems and hiding them under the carpet does not help. The first thing is to become aware of them, then take action. It is a process, and there is no The results that football has achieved in the last 20 or 30 years are really relevant, but there is still a long way to go.”

On last year’s open letter to Serie A on the racism problem: “It was a significant moment. A moment in which all the clubs came together in one voice to say that ‘we believe more needs to be done’. It was not just a message for the league or for government bodies, but also for ourselves.”

On the episode in PSG-Basaksehir: “We talk a lot about racism but I’m a little scared by the extreme reactions we have. Each of us carries prejudices, everyone. It can be behaviour not dictated by hate but by ignorance and lack of empathy.

“If my players did such a thing, I would support them, because I know they would do it for something they feel strongly. We need to listen to those feelings if we can deal with them in the right way.

“There is something more important than points and what happens on the pitch. In general I can say that football has been an extremely positive force regarding these things.”

Sky Sports reported in October that Liverpool and Manchester United are two of the clubs who are in talks about the possibility of forming a new mega-rich competition, one which would be backed by a huge €5billion (£4.6billion) financing package.

Calcio e Finanza (via MilanNews) reported that Milan would more than likely be one of the participants, but Gazidis gave the idea short shrift.

“This has probably been going on for more than 20 years. The reality is that there are many ways in which European football can develop and grow in the next 5-10 years. I don’t think there are any major chance to see a Super League the way people are talking about it now.

“I think there could be developments in the way the Champions League is played? Absolutely. It’s a conversation we should have and we should do it with an open mind.”