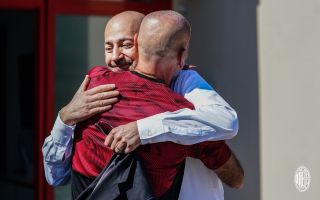 Milan have been on a journey with Pioli since he took over following Marco Giampaolo’s sacking early in the 2019-20 season. He signed his last extension before a game against Sassuolo amid a fantastic post-lockdown run, and now he has put pen to paper on a new deal before Sunday’s game against the Neroverdi, and of course after his first ever Champions League win as a manager.

The club confirmed his renewal live on Milan TV and Gazidis was interviewed by the channel shortly after he put pen to paper, with MilanNews relaying his comments starting with why the club have backed Pioli not just as a coach but as a person too.

“Not only the technical side is important to us, but also the person. Pioli represents our club very well, he is perfect to represent the values ​​of Milan,” he said.

“We are following our path, we have to think about taking one step at a time. Now Pioli went straight to Milanello to work, we are not talking about dreams, but about work.”

Pioli fairly recently celebrated his 100th game in charge of the Rossoneri in the 4-2 win over Bologna, and the hope is that we are just part of the way through a very successful and trophy-laden tenure.