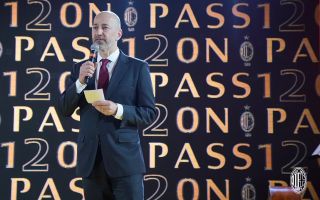 AC Milan CEO Ivan Gazidis has given a long interview to La Gazzetta dello Sport about a number of different topics related to the club.

Initially, the Rossoneri only intended to bring in young players, keen on building a Leipzig-esque team. However, they missed one important factor and that was experience, which Simon Kjaer and Zlatan Ibrahimovic brought to the team in January.

Gazidis spoke to the paper about the way Milan’s project under Elliott Management is evolving as well as some of the pillars of the club, such as Maldini, Pioli and Ibrahimovic, with his comments transcribed by MilanNews,

“Elliott’s goal is to bring pride to the fans, but to make them believe we must be the first to believe it,” he began.

On Elliott: “Milan are an institution for the country and for the world. We have a great responsibility, and the owners are fully aware of this too. This is told by someone who now feels not only Italian, but very Milanese.”

During the interview, Gazidis had some words of praise for Maldini: “Paolo represents the history of the club, but this is not the reason why I believe in him. I believe in him because he is a person who looks ahead, embraces new things, he works with humility and passion but also intelligence.

“It is something I saw immediately, as soon as I arrived. Maldini is the reference point of a sector that work in the right way in all its components.”

A consideration also on Stefano Pioli: “He’s a man of extraordinary depth. He came at a complicated time, he was faced with a complicated challenge. What impressed me is that he does things simply, he makes everything seem easy, even when it isn’t.

“Not to give weight to what was around him, and in fact we had the right solution under our noses. When we realised that he could achieve our vision, moving on with him was the most normal thing. His way of working and how he stands off the pitch, style is important.

“The truth is that even when we found ourselves in difficult moments, I saw a light in the team’s play and in no time neither I, nor Maldini and nor Massara thought it was all over. There was something that gave us hope. Ours is now a progressive, innovative vision, applied with courage and seriousness.”

Milan are first in the standings and are enjoying the current moment, and while the goal is to continue winning and growing, it must be without pressure.

“We don’t want to impose a fixed ranking goal, because it’s not that simple. Things aren’t so clear-cut , they are overall evaluations. For us it’s more important. see progress towards the goal, which is to give us a future worthy of it.

“Market? This team is a delicate organism, with so many ingredients, there is a balance that is magical enough to preserve. The choices must be coherent. Maldini is sensitive and intelligent, so he knows how to keep his balance.”

Gazidis was also asked about the chances of giving Zlatan Ibrahimovic a new contract given that his current deal expires in June 2021.

“We haven’t talked about the renewal yet. It will be a decision not only of the club, but also his. He is a special person with extraordinary motivations and great intelligence. This combination gives him great strength in everything that he does.

“We had already tried [to sign him] in January 2019, but he said no because the story with the Galaxy was not over. Ibra makes the group improve because he challenges you to give more, and this challenge is accepted by everyone, players and clubs. At this level, finding an extra 5% within oneself makes the difference.”

On the renewals of Donnarumma and Calhanoglu: ” The discussions are going on. And then there is no doubt about their professionalism, and this is important. I perceive a very positive environment. But I would like to make an important clarification. Ours is a story – collective, not single. When the players sing Pioli “is on fire”, the chorus is not really on Pioli, but they think of the collective.

“In this team everyone fights for each other, when one makes a mistake there is a great support. If you ask me the secret of the team, this is it. It’s hard to talk about individuality. We often talk about Ibra, okay, but everyone has a nice and fun story to offer. The absence of Zlatan strengthened the team. And then the team also gave something to him.”