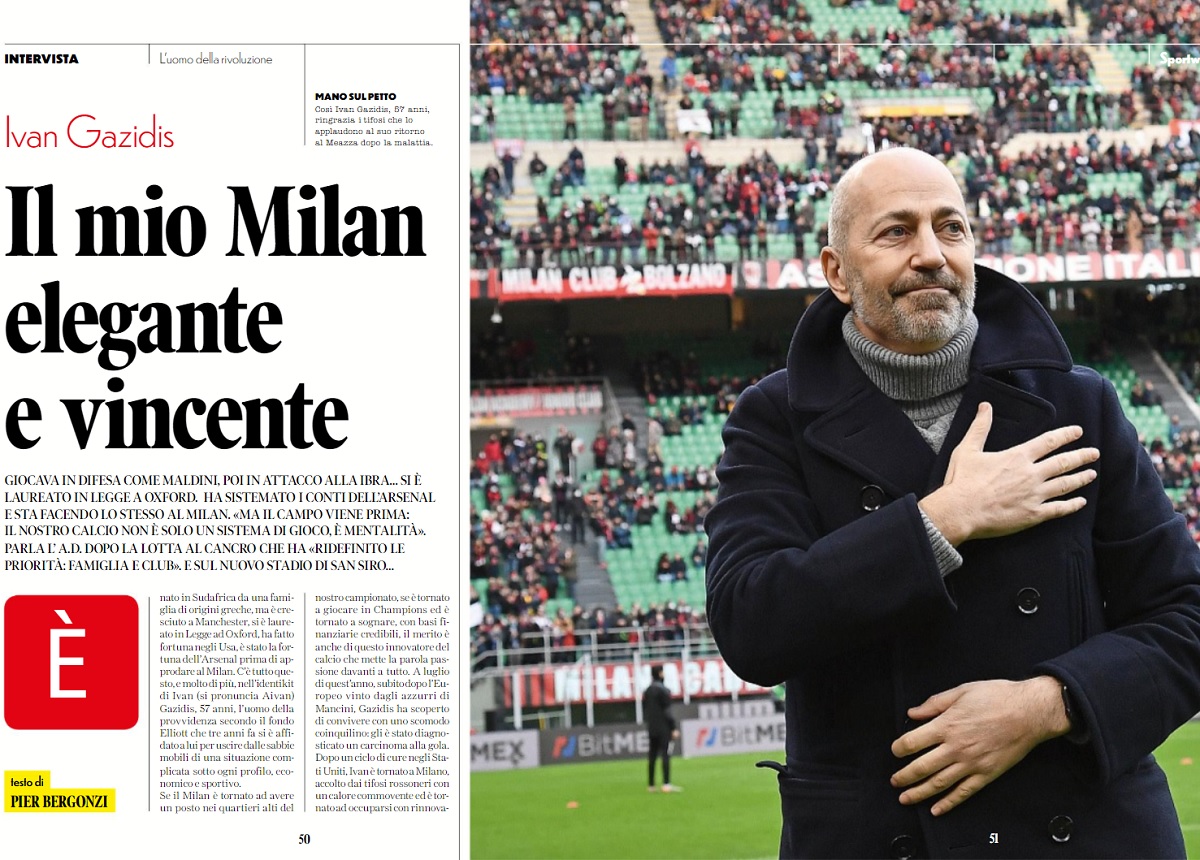 Gazidis discusses his vision for Milan, four key principles and his cancer diagnosis

Ivan Gazidis was initially met with a lot of doubt when he joined AC Milan from Arsenal, taking on the role as CEO of the club. However, as time has passed, the fans are starting to see the results of his good work.

Indeed, the Rossoneri have improved a lot commercially and this is crucial in today’s football climate. There’s no doubt that the positive sporting results have helped a lot but Gazidis has been a part of the process from the start.

This week’s edition of SportWeek, as cited by MilanNews, interviewed the South African about the progress Milan have made. He shared his vision for the club, as well as his thoughts on the ever-important Stefano Pioli and Paolo Maldini.

On his vision of the club…

“Milan have extraordinary fans who impressed me for their competence and authenticity. The reference values ​​are the same as we had at Arsenal. Values ​​that everyone must refer to, all those who work for Milan. The first value is that of unity, which means cohesion of intentions, but above all inclusion. We are all welcome!

“And then there is a style of behaviour that is associated with Milan, I would say that you can summarize with the word elegance. And the desire to look ahead, even beyond the confines of football, to have a perspective.”

“From day one we had a clear strategy based on 4 principles. First: the pitch is a priority, because modern football is not just a game system, but it is a mentality. Speed, pressing, one on one and transitions. I would like a strong AC Milan, one that excites and creates pride in all the Rossoneri!

“Second: increase revenues with a new organization structure. Milan is a strong brand that has over 500 million supporters worldwide. We are the strongest Italian sports brand in various strategic markets such as the USA and China. And in the last 12 months, we have closed contracts with 21 new sponsors.

“Third: a new stadium. It is necessary to have a future. Four: creating the foundations for economic sustainability. We have solid ownership, who supports us and strongly believes in this project, but there is still a long way to go.”

“Person of superior sensitivity! Stefano tries to understand others and cares for everyone. Anyone who feels this empathy and professionalism would throw themselves into the fire for him. He is a professional in tune with our vision.”

“He is also a symbol, a football legend, but above all, he is a sporting director who knows football very well and knows how to look ahead with economic sustainability in mind. In the last three years, he has grown a lot.”

On the renewal of Ibrahimovic…

“With regards to individual players, I prefer to leave the answer to Maldini. The Zlatan I know is a man of great intelligence and sensitivity. He has a private identity that I adore and a public personality that nurtures and uses to motivate oneself. After all, to remain competitive at 40, motivation plays a decisive role.”

A few months ago, back in the summer, Gazidis was diagnosed with throat cancer and he has since been getting treatment for the condition. When asked about the matter, he stated that everything is going well.

“Now I am very well. The treatments have had the effect we expected and I can consider myself lucky, very lucky. It is as if I came back from a journey. A long and troubled journey in which I learned a lot.

“I had a very rational reaction. I was thinking, how do I tell my family about it? I was thinking about how to reorganize relationships and work. I felt the greatest emotion when I returned to San Siro. I had such a welcome that I was moved. I felt real closeness. I understood how big the hearts of the Rossoneri fans are,” he concluded.

READ MORE: The schedule of the day as Milan prepare for important Napoli clash