Following the important win against Brescia last time out, AC Milan are now gearing up to take on Torino in the Coppa Italia quarter-finals. The Rossoneri could make it five consecutive wins in all competitions.

Given that it’s a cup game, Stefano Pioli is expected to make some changes to the starting eleven. According to today’s edition of Gazzetta Dello Sport (via SempreMilan.com), he will make a total of five changes compared to the Brescia XI.

Mateo Musacchio will replace Simon Kjaer in the back-four, having fully recovered from his injury struggles. In the midfield, meanwhile, Rade Krunic and Jack Bonaventura will come in to replace Franck Kessie and Hakan Calhanoglu.

Up front, there will be a new attacking duo as Kris Piatek and Ante Rebic are expected to partner up. The two played from start in the last Coppa Italia game – against SPAL – and did quite well together. Take a look at the XI below. 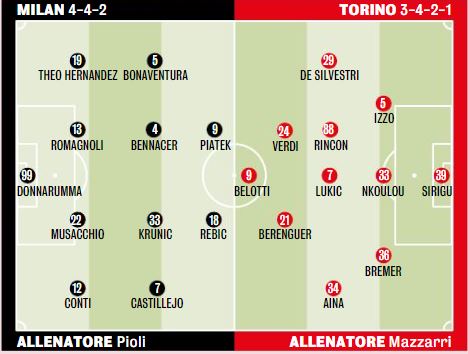