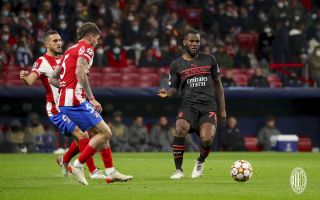 A number of AC Milan players were deserving of praise for their part in last night’s 1-0 win over Atletico Madrid, according to La Gazzetta dello Sport.

The paper (via MilanNews) have published their player ratings for the Milan squad this morning, and they believe that midfielder Franck Kessie (rating 7.5) was the best player on the pitch, followed by substitute Junior Messias who got the same score as the match-winner thanks to his late header.

High marks were also given to Simon Kjaer, Sandro Tonali, Alexis Saelemaekers and Zlatan Ibrahimovic as they all got a 7 out of 10. There were also excellent performances from Pierre Kalulu, Alessio Romagnoli, Theo Hernandez, Alessandro Florenzi, Ismael Bennacer, Brahim Diaz, Rade Krunic and Tiemoue Bakayoko, who each got a 6.5.

Finally, striker Olivier Giroud got a 6 as he struggled to make much impact before going off injured, while Ciprian Tatarusanu got the same score as he thankfully had a quiet evening.