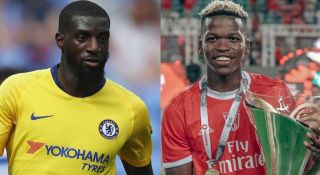 GdS: Benfica starlet and Chelsea outcast are Milan’s two targets for the midfield

AC Milan have two targets in mind as they look to give Stefano Pioli the midfield reinforcements he asked for, according to a report.

After Milan-Cagliari on Saturday night Pioli – speaking in the press conference – Pioli admitted the need to sign midfielders in particular.

MilanNews recently reported that the Rossoneri will not spend €30-40million for a single midfielder, a reason that perhaps prevented the Rossoneri from actually competing in the race for Tonali. It is simpler that this figure can be divided and spent on two players, maybe at €20m each.

According to La Gazzetta dello Sport (via MilanNews), there are two targets in mind. The first is Benfica’s Florentino Luis, who could join his compatriot Rafael Leao and be an exciting deputy to Ismael Bennacer.

In addition, Tiemoué Bakayoko’s name has not gone away as he could finally secure a return to Milan after his 2018-19 loan spell under Gennaro Gattuso.