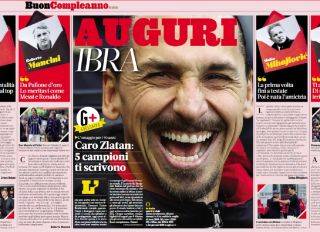 Zlatan Ibrahimovic will turn 40 tomorrow and he has no intention of stopping just yet, with the World Cup in his mind. Currently, however, he’s recovering from an injury and he’s hoping to be back in action shortly.

As said, it’s the striker’s birthday tomorrow and Milan will have to give him three points from the game against Atalanta. The whole team celebrated Ibrahimovic at Milanello yesterday and the man of the hour held a toast as well.

It’s clear that Ibrahimovic is a very important player for the Rossoneri and even though he won’t feature tomorrow, his support will be felt from the stands. One would imagine that he gave the team some inspiring words during his speech yesterday.

In today’s edition of Gazzetta Dello Sport (via SempreMilan), some important men have sent their birthday wishes to Ibrahimovic. The ones of Zvone Boban, Roberto Mancini and Sinisa Mihajlovic are translated below.

Boban: “22:30 on December 24, 2019. One and a half hours to Christmas. The cell phone rings. His name appears on the display. “Congratulations, you and Milan have signed Ibrahimovic. That was Zlatan’s way of announcing his return to the Rossoneri. I couldn’t have hoped for a better Christmas present.

“And now that we are approaching such an important date, I can only add to the long list of friends who wish him good wishes. The whole world of football owes a lot to Zlatan for his uniqueness as a footballer and as a character who has marked the last 20 years of football in an incredible way. His name and his story will be remembered for who knows how long.

“As a former director who strongly wanted his return to the Rossoneri when he was already 38, I can say without a doubt that Milan’s path to return to these levels wouldn’t have started if he hadn’t been there. At that moment, there was not a player in the world who could give what Ibra gave in terms of personality, charisma, performance, mentality. On and off the pitch. A phenomenon: and I will always thank him. Auguri, Zlatan!”

“We have always got along well, we have never had any problems. I was lucky with you for another reason as well: I had the pleasure of training you perhaps at the peak of your career, it was truly an extraordinary moment for you. This is why today seeing you on the pitch like this makes me happy: not because you are still playing at 40, but because you still do it at high levels.

“And this – but you know it – is the best reward for your professionalism. You missed the award that for many, not for you, is the highest recognition for a player, the Golden Ball: for me, you would have deserved it as Messi and Cristiano Ronaldo have almost always deserved it in recent years. From what you have shown, you have not been outdone by them. And have a beautiful birthday.”

Mihajlovic: “The first time we met we exchanged insults and hurls to the point of being sent off. And the last time, we found ourselves singing together, but it would be better to say out of tune, on the Sanremo stage by destroying the song “Io vagabondo”. Between that April 20, 2005, when I came to look for you in the locker room to beat you without finding you, but thinking ‘this guy has balls’, and last year’s Festival, when you wanted me to be your guest, 16 years have passed and lifetime.

“We first had to clash to understand that we were made of the same dough: that of tough, confident people, but always true. Over time I have discovered that the Ibra man is worth as much if not more than the champion. And I understood it once again when, during my illness, you called me to the hospital and you could not speak because of the emotion, but you said in a faint voice: “Sini, for you I am willing to do anything, call me and I also play for free.

“You know how much I would have liked to have you on the team, but it was right that you returned to Milan to end an epic career. Which is not over yet. I know you will still contribute, with the class and personality that makes you unique in the world. Best wishes my dearest friend: for lions like you, the time that passes does not count.”

READ MORE: Messias is finally ready for Milan and Pioli has two positions in mind