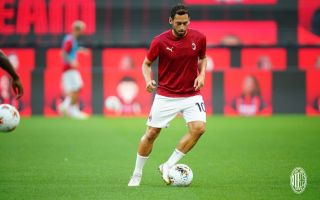 The situation surrounding the renewal of Hakan Calhanoglu is becoming ‘increasingly complex’ for AC Milan, according to a report.

In our exclusive interview with Christian Falk, the Bild journalist revealed that there is a ‘90% chance’ that Calhanoglu joins Premier League giants Manchester Untied on a free transfer.

According to La Gazzetta dello Sport (via MilanLive), the situation has become a real race against time for Milan as Calhanoglu’s contract expires in exactly seven months.

It becomes even more of a problem when you realise that the Turkey international can sign for another club on a pre-contract at the end of January.

The obstacle is the high salary requested by his agent Gordon Stipic, and in mid-December a meeting will be staged between the German and the Milan management, but the distances seem unbridgeable at the moment.

The current request is around €7m net per season, while Milan’s offer is currently stuck at €3.5-4m net including bonuses, and they do not seem willing to budge given that it is particularly difficult time for the world of football at an economic level.