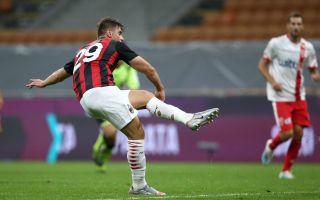 AC Milan managed to beat Monza by four goals to one last night, fielding a makeshift starting eleven as several key players are on international duty. Several youngsters got a chance last night, which is good to see.

Daniel Maldini and Emil Roback both played from the start, acting as the wingers in the attacking trio behind Zlatan Ibrahimovic. The young Swede could have done better, failing to replicate his display against Novara, but Maldini showed a bit more.

He even got himself on the scoresheet with a lovely finish and looked promising throughout the entire game. He was subbed off in the 70th minute and that’s when Lorenzo Colombo and Pierre Kalulu entered.

The right-back, just like Davide Calabria, scored with a thumping finish and looked impressive overall. Colombo also decided to join in on the fun and scored a great goal with a curling effort. Pioli is enjoying the youngsters, as reported by Gazzetta.