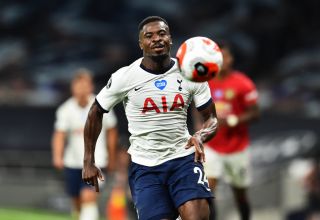 Milan have decided to focus on Serge Aurier. The Rossoneri need a new right-back ahead of the upcoming season and the Ivorian international has been identified as the perfect replacement for Davide Calabria, a report claims.

As reported by today’s edition of Gazzetta dello Sport (via MilanNews.it), Aurier has overtaken Denzel Dumfries on Milan’s wish list and has given his okay to the move. Now, the Rossoneri need to reach an agreement with Tottenham.

The London side are asking for €20m to part ways with the 27-year-old, while Paolo Maldini has offered €15m, perhaps slightly more. Therefore, the negotiations are still ongoing and Milan are keen on closing the deal.

The operation is considered difficult, but it’s worth trying. Also because, as mentioned, Aurier has opened up to a move to the San Siro. In addition to Milan, Bayer Leverkusen have also shown their interest in the defender as of late.