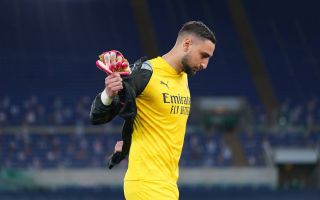 Gigio Donnarumma could play his last game for Milan tomorrow, as his contract with the club will expire on June 30th. There is still no agreement on the renewal in sight, but the goalkeeper is focused on only one thing.

Despite the special situation, as Gazzetta Dello Sport writes (via MilanNews), Donnarumma is only thinking about the game against Atalanta tomorrow. The outcome of the game will be decisive for Champions League, so he needs to be at his best.

The young goalkeeper still believes that he can stay at Milan, especially with UCL secured, and thus tomorrow’s game will be very important in that sense. He has fought for it all season, along with his teammates, so nothing can distract him now.

After the game, however, it’s possible that reality will creep up on Donnarumma and it remains to be seen how the renewal negotiations will proceed. For Milan, it would be important to lock him down.