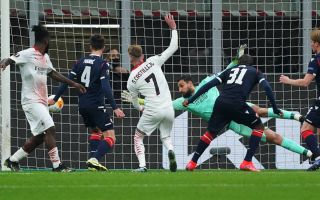 GdS: Donnarumma proves his worth yet again – his dream remains the UCL with Milan

When Franck Kessie’s penalty gave Milan the lead inside 10 minutes last night, it seemed unlikely that Gianluigi Donnarumma’s heroics would be the reason the team went through.

The Rossoneri needed away goals to eventually get past Red Star after a 3-3 draw on aggregate, and an amazing reflex save to deny Sanogo meant that Donnarumma drew all the plaudits on a difficult night at San Siro on his 22nd birthday.

This morning’s edition of La Gazzetta dello Sport (via MilanNews) writes that Donnarumma is currently one of the few certainties that Milan have and the management know very well how decisive he is. For this reason they are doing everything to secure his renewal as soon as possible, but time is running out because his contract expires on June 30.

The player himself has never hidden his desire to stay at Milan and play the Champions League with the Rossoneri shirt, as he grew up dreaming of. However, the final details of the new contract must first be defined, but we know that dealing with his agent Mino Raiola is never easy. At Casa Milan they know they cannot afford to let a generational talent leave for free.