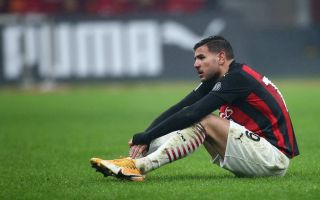 Given his recent form, you could make a genuine case for Theo Hernandez being one of the best full-backs in world football.

As La Gazzetta dello Sport highlights (via MilanNews), the Rossoneri are making Theo Hernandez great, but the Frenchman is keeping Milan powered. Another game, another superb performance complete with a winning goal and another message to the French national team.

Theo, step by step, is confirming himself as the young leader of Milan. Ibrahimovic is the undisputed boss on the field, with Kjaer, Donnarumma and Calhanoglu the other pillars (as well as Kessié and Bennacer), but against Lazio it was Theo who was once again decisive.

He was incisive in the attacking phase and he now seems more attentive and solid even in the defensive aspect. In short, an increasingly complete player.

Of course he got a yellow card that will not allow him to take the field against Benevento on January 3, but it means he will be back to face the old enemy Juventus.